While there has been no additional news of a sale of CEC by its owner, Apollo Global Management, the company continues to make progress on updating it brand – new menus, a new look for its restaurants and gaming areas, new loyalty program and new home delivery of its famous pizza. CEC management is betting that the changes they are making will attract a new generation of families looking for good food and family friendly entertainment. CEC’s 2022 bonds are currently trading at a discount, resulting in a yield-to-maturity of over 11%. This outstanding yield makes these bonds a good candidate for additional weighting in Durig Capital’s Fixed Income 2 (FX2) Managed Income Portfolio, the most recent performance of which is displayed below. 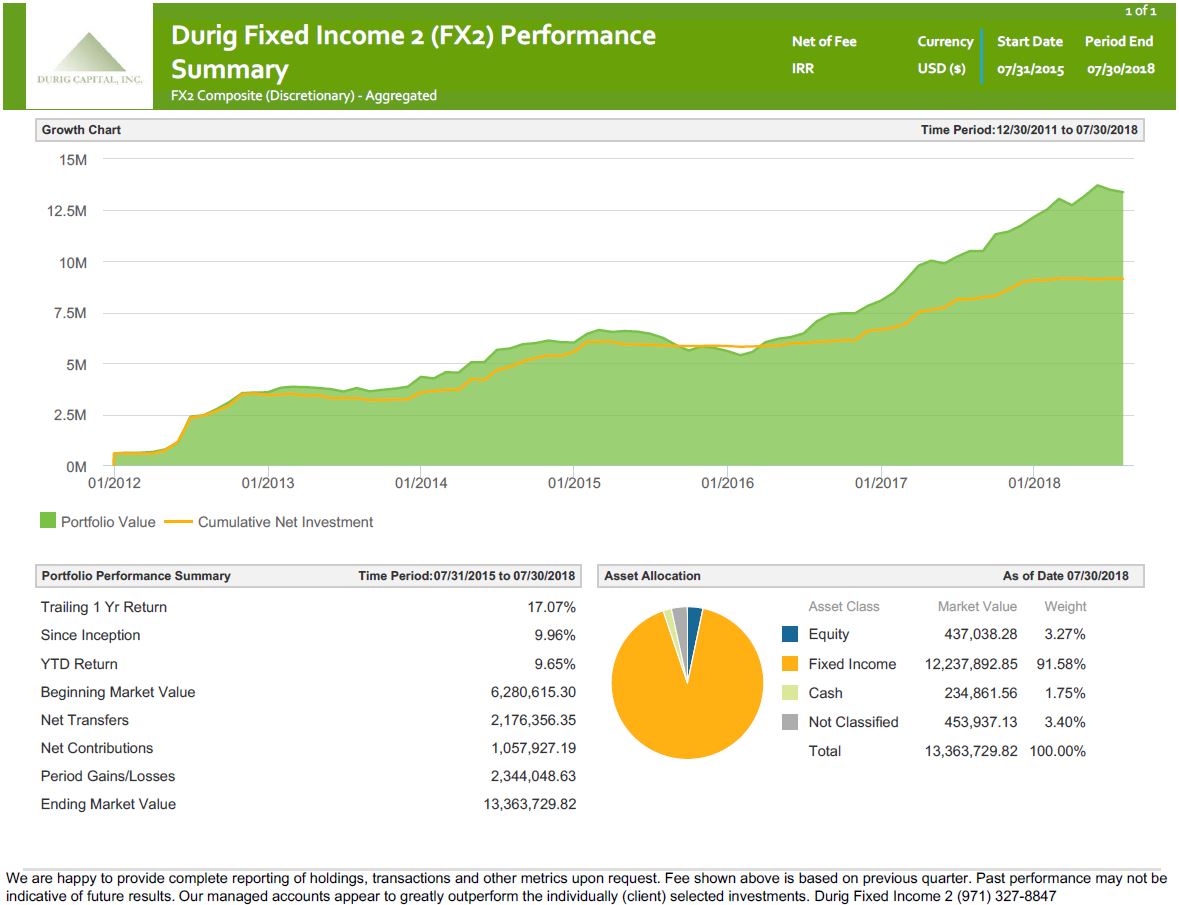 After almost twenty years, Chuck E. Cheese continues to update its brand and offerings. Since the start of 2018, the company has introduced three game-changing initiatives. First, CEC introduced its first ever loyalty program. The “More Cheese” rewards program offers its members exclusive rewards that are redeemable on food, drinks, games and prizes. The program was instituted to reward customers and families for the number of visits as well as total spend per visit. Second, CEC began home delivery of its famous pizza to homes nationwide. The company has partnered with GrubHub, Uber Eats, and DoorDash to deliver its fresh, never-frozen pizza to customers across the country. CEC boasts that all of its ingredients are fresh, never frozen and that all of its pizza is made from scratch daily. The third initiative introduced this year is the company’s “All You Can Play” gaming experience at all company owned locations. Starting at just $9 for 30 minutes, All You Can Play replaces tokens and / or play points and ultimately means more play for less money.

Headquartered in Irving, Texas, CEC Entertainment. Inc. (CEC), was originally incorporated under the name ShowBiz Pizza Place. In 1998, the company changed its name to CEC Entertainment.  CEC is currently majority-owned and controlled by investment funds affiliated with Apollo Global Management, LLC. For more than 35 years, CEC Entertainment has served as the nationally recognized leader in family dining and entertainment. Its brands include Chuck E. Cheese as well as Peter Piper Pizza. As the award-winning, number-one, kid-friendly restaurant for millions of families across the world, the company and its franchisees operate a system of 756 venues located in 47 states and 13 foreign countries or territories as of April 1, 2018.

Tom Leverton, CEC’s Chief Executive Officer had some encouraging comments regarding the company’s first quarter and the beginning of second quarter. “Our comparable venue sales performance improved each month during the quarter. And we have seen that trend continue recently. Comparable venue sales for the first five weeks of our second quarter have increased in the mid-single digit percent range.” If the company can continue this trend, second quarter results should show healthy year-over-year growth.

According to the CEC’s annual report for FY 2017, the company has identified several areas of focus in order to increase comparable venue sales, improve margins and profitability as well as expand its presence both domestically and internationally.

To improve same-store venue sales, the chain has enhanced its menu as well as begun a redesign campaign for its existing stores. Chuck E Cheese’ enhanced food offerings have been designed to appeal to parents as well as kids. In addition to the traditional cheese and pepperoni pizza (popular with kids) the restaurant has added BBQ chicken pizza, Cali Alfredo pizza as well as fresh wraps and fresh sandwiches so that parents can have a choice of menu items that appeal more to the adult crowd. Also, the redesign of its restaurants began with seven test sights in 2017 and after favorable reviews, will be expanded to 25 additional locations in 2018.

In order to improve profitability and margins, the company has already taken steps toward these goals. Store managers currently have revenue, profit and cash flow incentives. And the company has invested in technology to drive cost savings, including new point-of-sale terminals, automated reordering for food supplies and an enhanced labor management tool.

These initiatives have generated cost efficiencies in a number of key areas, including labor, supplies, food and general and administrative expenses, and CEC expects these cost efficiencies to continue in the future.

Interest coverage is of paramount importance to bondholders as it indicates a company’s ability to service its existing debt. For the most recent quarter, CEC had operating income of $34.7 million and interest expense of $18.6 million for an interest coverage ratio of 1.9x.
CEC also had outstanding cash from operations for its first quarter of $52.6 million.
As of April 1, 2018, CEC also reported healthy liquidity levels. As of April 1, 2018, the company had cash and cash equivalents of $98.7 million, with another $140.1 million available on its undrawn revolving credit facility.

The risk for bondholders is tied to whether CEC can continue to grow revenues and profitability as well as continue to expand its number of stores both in the U.S. and internationally. The company has grown since being acquired by Apollo Global Management in 2014. And the image updates are making the chain attractive to families once again. The new initiatives introduced this year should bring more traffic to existing stores and provide a blueprint for new store openings. The company has excellent interest coverage and earns more than half its revenues from its high margin entertainment and merchandise sector. In light of these factors, the outstanding, over 11% yield-to-maturity on CEC’s 2022 bonds does appear to outweigh the risks identified. 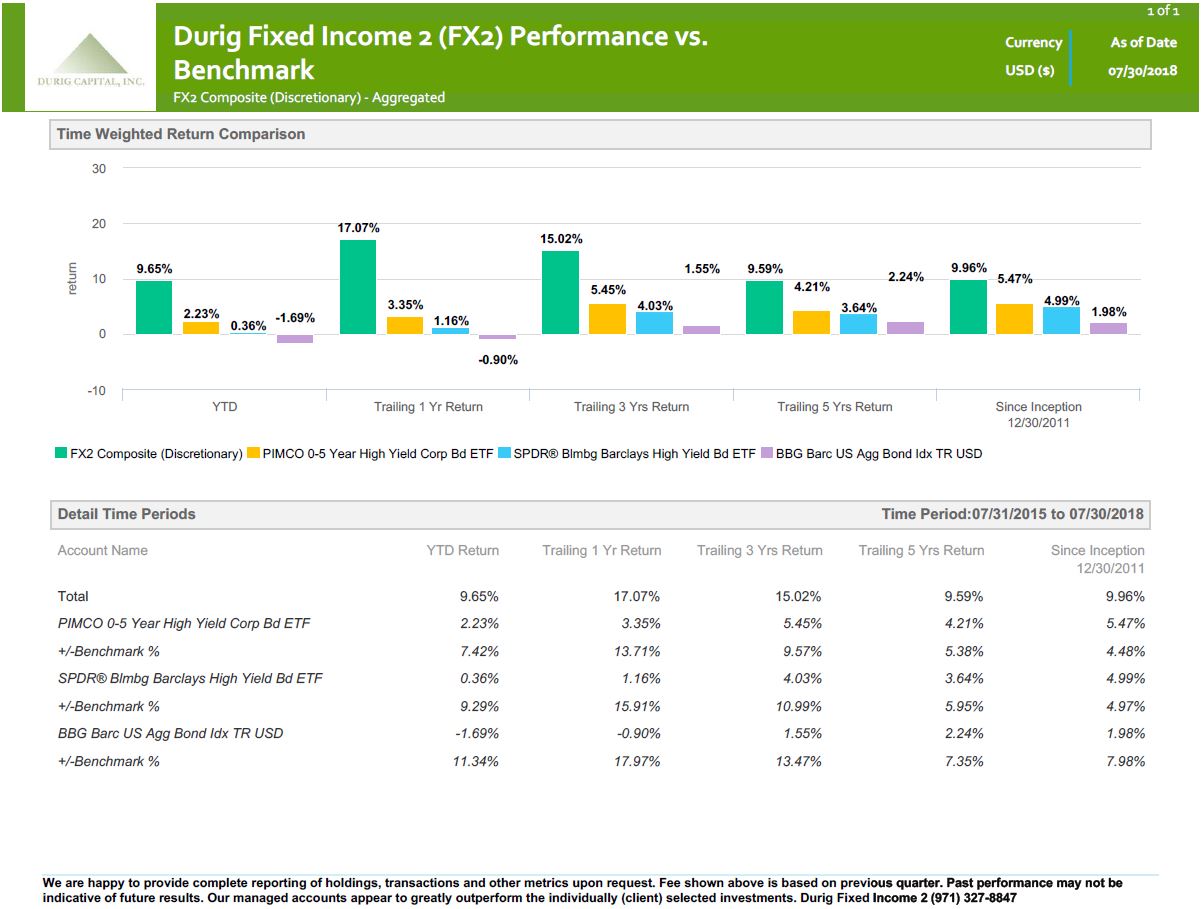 Generations have grown up with Chuck E. Cheese. Now, the company is making strides to update its image, as well as its restaurants and entertainment. The physical redesign of its existing stores has yielded positive results as the company prepares to enlarge its pilot group. New initiatives have provided new appeal for kids as well as parents. Given the company has excellent cash flow, interest coverage and liquidity, these 2022 bonds are ideal for additional weighting in the Durig Capital’s Fixed Income 2 (FX2) Managed Income Portfolio, the recent performance of which is shown above.