This week, Durig Capital explores a popular variation of the classic Dogs of the Dow investment strategy, introduced by Michael O Higgins in the early 1990’s.  The strategy has been widely accepted by some for its simplicity and repeatability, yet denounced by others for the exact same. Durig Capital believes less complicated is better; fewer moving parts mean fewer potential points of failure, and has done well historically with it’s own unique version of this simple strategy, discussed later in the article.

Small Dogs of the Dow

There are several variations of the classic form of the Dogs of the Dow Strategy which was discussed in our last article, but the main variation is the Small Dogs of the Dow, which selects the five lowest priced stocks of the 10 highest dividend yielding stocks listed on the Dow Jones Industrial Average (DJIA), with the rest of the strategy remaining unchanged from the classic strategy.  The basic idea behind this variation is that the lower priced, “small dogs” have more room to run with respect to their stock price and should allow for increased potential for gains.

Durig’s take on the Dogs of the Dow

Durig’s version of this time-tested strategy has two slight adjustments which have helped it to outperform over time while significantly mitigating downside risk.

The second adjustment is the weighting; Durig’s version of the Dogs of the Dow strategy utilizes strategic weighting to achieve higher yields.  The top “dogs” (stocks with higher dividend yields of the 9 selected) are given more weight than the other stocks in the portfolio.  The result of these adjustments is increased exposure to the “top dogs”, and since the stocks contained in the Dow are typically very large and established blue-chip companies with long track records of high, stable, or increasing their dividends, the chances of the dividends being significantly cut are relatively low, so this typically equates to increased dividend income over the year.

Durig’s Dogs of the Dow – Outperforming the Competition

Let that sink in for a moment.

In a return period containing one of the most significant bouts of market volatility seen in recent years, Durig’s Dogs of the Dow still outperformed the classic form of the strategy, the Small Dogs of the Dow, not to mention the Dow Jones Industrial Average itself which ended 2018 with – 3.5%, compared to Durig’s + 4.79%.

As successful as 2018 was for Durig’s Dogs of the Dow, the annualized lifetime return is where Durig’s unique take on this strategy really shines. 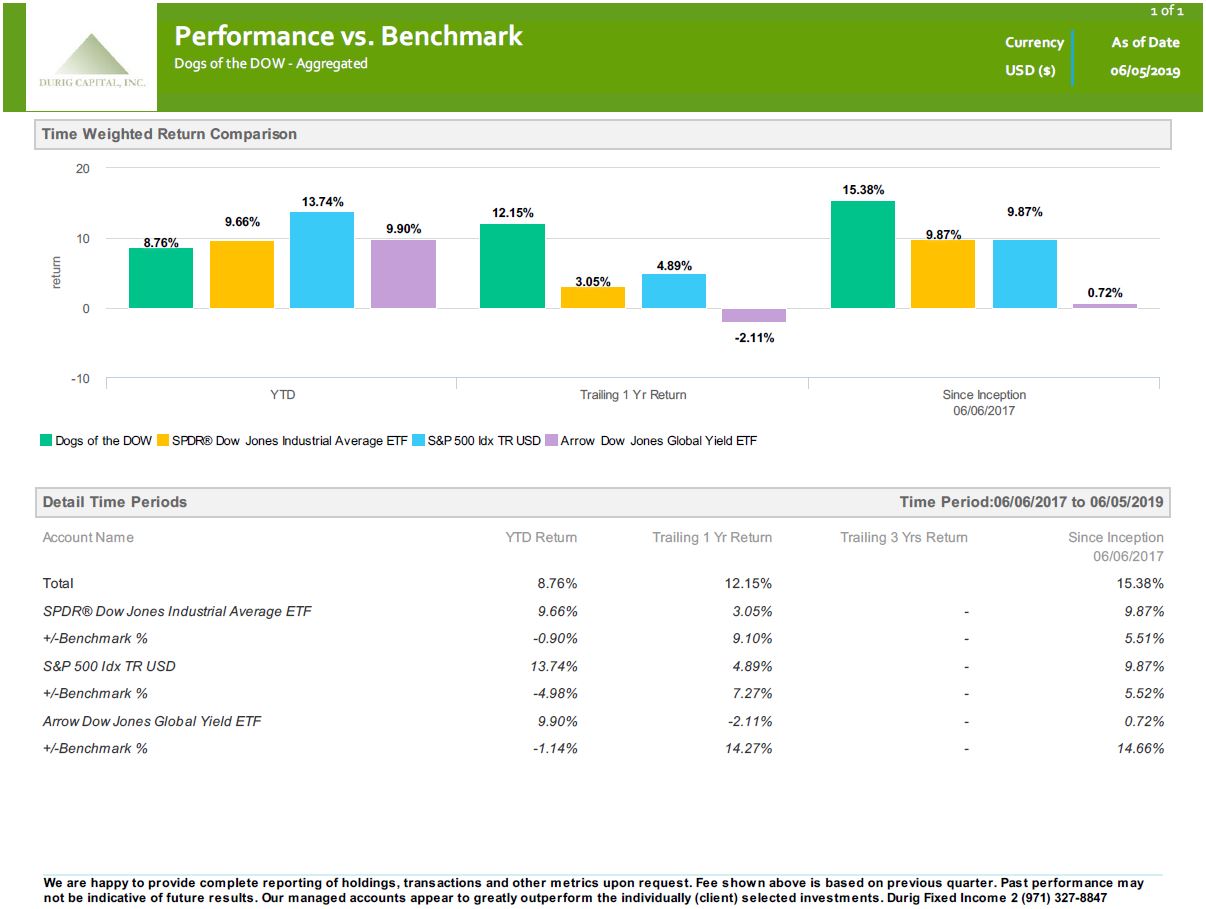 Durig’s annualized lifetime return of 15.38% represents an excess return of over 6% and 5%, respectively.

When compared to the closest available benchmark for the Dow Jones (SPDR’s Dow Jones Industrial Avg. ETF), Durig’s Dogs of the Dow Portfolio has offered investors an annualized excess return since its inception of 5.26%, the aggregated and benchmarked performance of which is shown above.

The Dogs of the Dow strategy has been more successful than not over the long-term, outperforming the Greater Dow Index four times in the last five years, and seven of the last 10 years, adding further merit to this simple strategy.

In comparison, Durig’s version outperformed not only the classic form of the strategy, but the Small Dogs of the Dow, as well as the Dow Jones Industrial Average last year (2018), and appears to be on track to do so again as it builds on its excellent historical performance.

Through its practice of strategic weighting and reducing the number of portfolio holdings, Durig Capital has constructed a Dogs of the Dow Portfolio that, historically, has offered similar yet less volatile returns to the Dow while significantly mitigating downside risk– all while beating the Dow Jones Industrial Average and both the “official” Dogs of the Dow as well as the Small Dogs of the Dow in 2018.

Sign up to receive updates on the Dogs of the Dow, Free Leading Financial News, Market Research, & much more!

If you have questions or would like further information on Durig Capital’s version of the Dogs of the Dow, please do not hesitate to call us at (971) 327-8847 or email us at: info@durig.com.

Disclaimer: Please note that all yield and price indications are shown from the time of our research.  Our reports are never an offer to buy or sell any security, and are for information only. The high yield strategies presented may not be suitable for all investors.  This is not investment advice from Durig Capital, nor a specific recommendation to buy or sell securities. Past performance is no guarantee of future results. If you have any questions or concerns about its suitability for your personal investment, you should seek specific investment advice from a registered professional before making any investment decision.

Durig Capital provides investors with a specialized, transparent fiduciary service at a very low cost, and has now created its own version of the well established Dogs of the Dow strategy, with a slightly different, specialized approach to investing in the Dogs of the Dow. Learn more at dogsdow.com or call (971) 732-5119.
http://dogsdow.com/