This week’s bond review delves into the retail sector with a specialty retailer of durable consumer goods who also offers its customers financing on their purchases. Conn’s Inc., which is headquartered in Texas, has a market presence that stretches across the southern United States. It’s most recent quarterly results show a company registering wins from a multi-year planned strategic repositioning. Total operating income increased by 62.3% over the prior year period. In addition, Conn’s posted a record quarterly retail gross margin of 39.6%. The company’s credit segment had positive outcomes as well, generating its first positive operating income in four years as credit revenues grew over 8% year over year.  Conn’s continues to grow, opening two new stores in its most recent quarter, with more scheduled for this fiscal year. The company’s 2022 bonds are in demand right now, with a yield-to-maturity of about 7.18%. This competitive yield as well as the opportunity for diversification into the retail sector, makes these bonds a smart addition for Durig Capital’s Fixed Income 2 (FX2) Managed Income Portfolio, the recent performance of which is shown below. 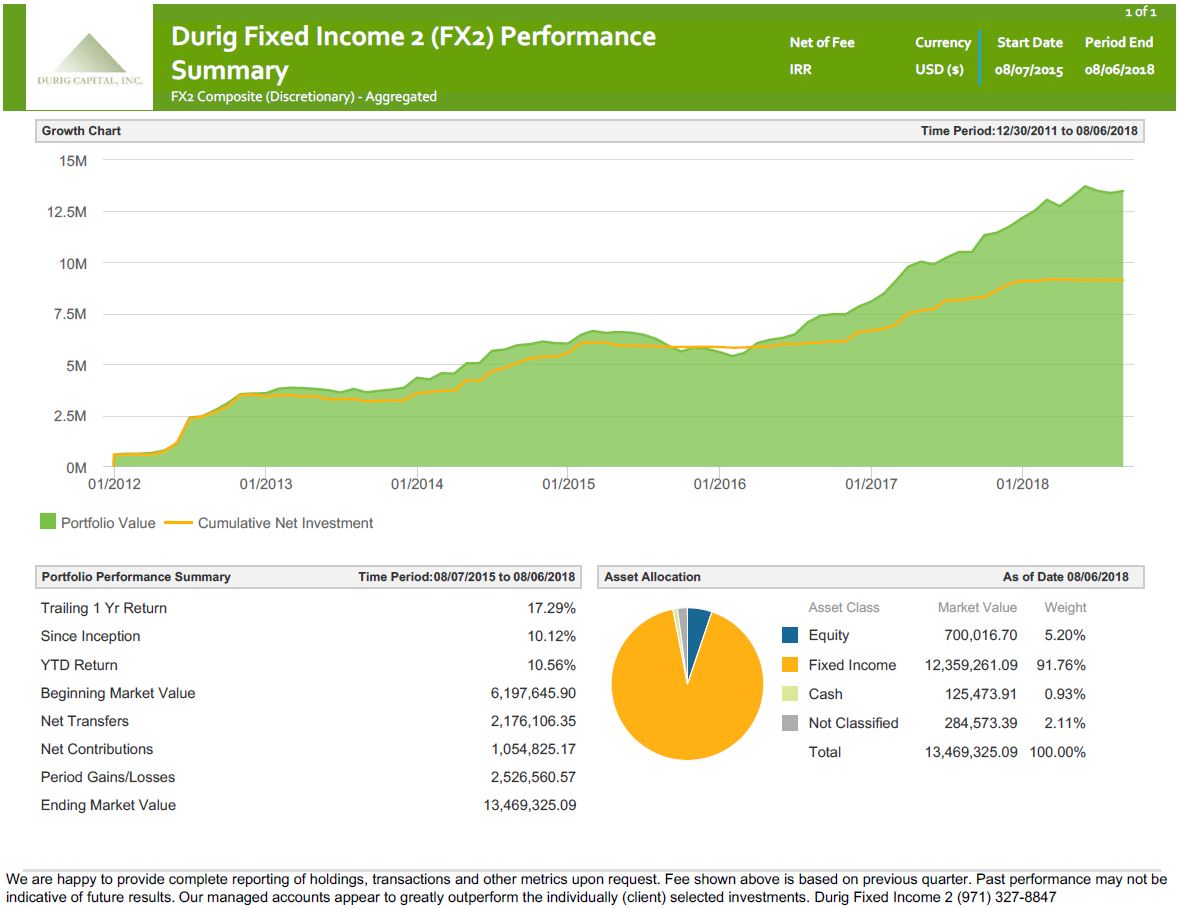 Conn’s recently posted results for the three months ending April 30, 2017 (Q1 FY 2019). The company showed many improvements over the previous year’s first quarter. Some highlights from first quarter results include:

Norm Miller, Conn’s CEO commented on the company’s Q1 performance, “Our first quarter results reflect accelerating momentum throughout our business and we believe that fiscal year 2019 will be a strong year for the company”.

Conn’s is a specialty retailer of durable consumer goods and provider of financing solutions to credit-constrained consumers. Headquartered in The Woodlands, Texas, the company has 118 stores located throughout 14 states. Conn’s operates through two segments, retail and credit, and provides the opportunity to purchase high quality premium brand products across four primary categories: furniture and mattresses, appliances, electronics, and home office goods. The company’s product selection is focused on higher priced, large ticket items (such as bedroom sets, mattresses, refrigerators and televisions) which generate higher margins and typically require some form of financing. Unlike many of its competitors, Conn’s provides flexible, in-house credit options for its customers in addition to third-party financing and third-party lease-to-own payment plans.

In September 2015, Conn’s announced leadership changes along with strategic repositioning of its business. Norman Miller, former President of both Sears Automotive and DFC Global, stepped into the role of President and CEO of Conn’s. Along with this, Conn’s added a Chief Credit Officer as well as a Credit Compliance Officer. The company also named a new Chief Financial Officer. Fast forward nearly three years later and the management changes appear to be paying dividends.

Conn’s has very specifically defined its target market.  Conn’s core customer demographic represents underserved consumers that typically have credit scores between 550 and 650 and who usually have limited financing options. (According to FICO, in 2017, this credit score demographic represented 20% of the U.S. population). These customers typically earn $25,000 to $60,000 in annual income, live in densely populated and mature neighborhoods and usually shop to replace older household goods with newer items. When studying the makeup of Conn’s actual retail and finance customers, these characteristics are definitely present. For the three months ending April 30, 2018, (Q1, FY2019), 36% of Conn’s scored originations had credit scores between 551 and 600, and 38% had credit scores between 601 and 650.  With roughly 1 in 5 people falling into Conn’s core target market, there are substantial opportunities for growth, both within the company’s existing footprint as well as in urban areas where the company does not currently operate.

In terms of liquidity, as of April 30, 2018, Conn’s had $233.5 million of available borrowing capacity under its $750 million revolving credit facility. In addition, the company also had 6.2 million in cash for a total liquidity of $239.7 million.

The risk for bondholders is directly related to Conn’s ability to continue its upward trajectory in same store sales, opening additional profitable locations in its current market footprint, and continuing to increase the profitability of the credit side of its business. The company’s management change back in late 2015 does appear to be paying dividends now based on the outstanding Q1 results recently posted. Also, Conn’s credit segment is growing more profitable and its credit offering for customers is a distinguishing factor amongst its competitors. There is also still room for significant growth in its target market (as defined by credit scores). The yield to maturity on Conn’s 2022 bonds of around  7.18% does appear to outweigh the risks identified here. 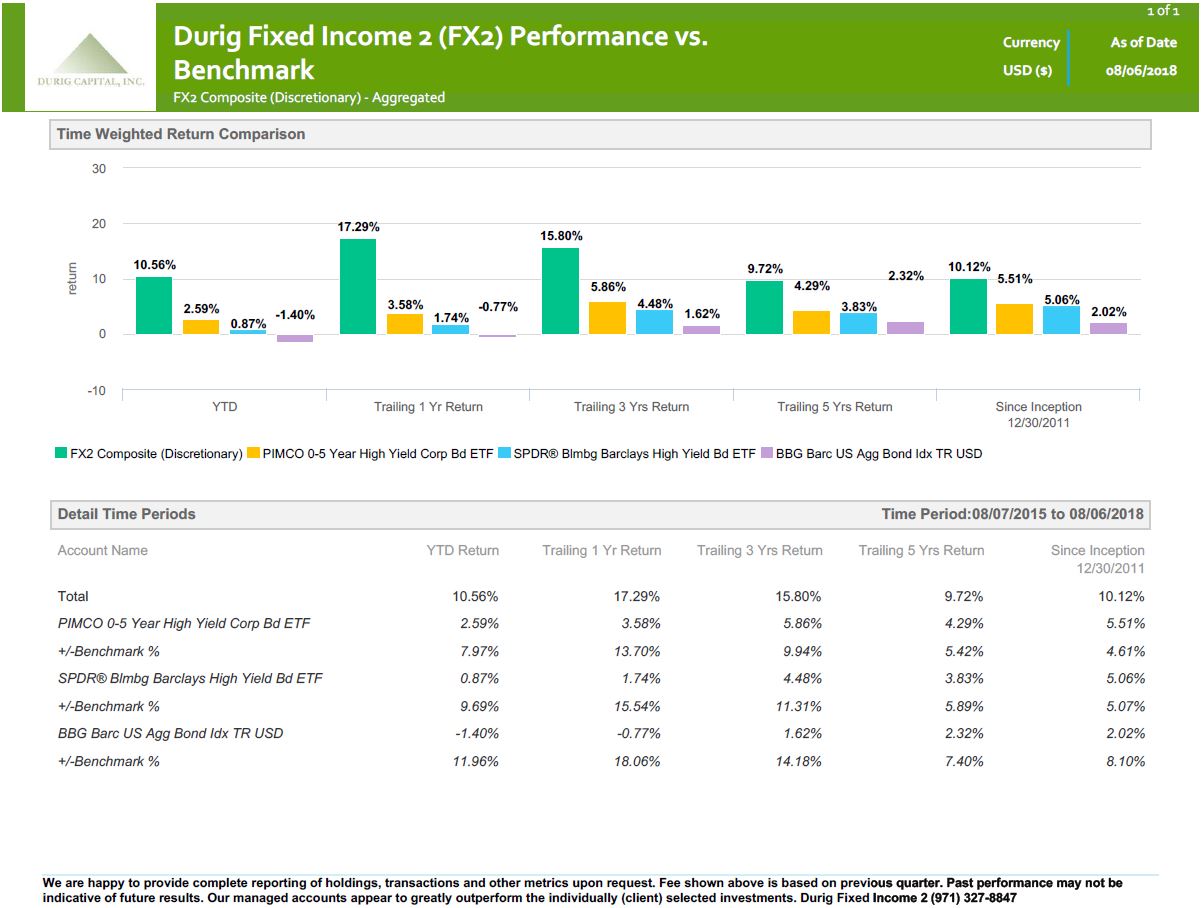 According to the IRS, 62.4% of U.S. households have annual adjusted gross incomes of less than $50,000. This means that the prospective target market for Conn’s is significant. Not only is there opportunity for growth in states where they already maintain a presence, but also in urban areas where Conn’s has yet to establish stores.  The management change in 2015 looks to be paying off, with increased same store sales, increased credit revenues and increasing retail margins. With a strong Q1 for its FY 2019 in the books, Conn’s prospects for sustainable growth look promising. The company’s 2022 bonds, with a yield to maturity of about 7.18%, provide excellent diversification and are an ideal addition to Durig Capital’s FX2 managed income portfolio, the recent benchmark performance of which is displayed above.