Diversification is the word this week as Durig Capital takes a second look at the number two grocer in the United States. Albertsons recently posted its first quarter results for fiscal year 2018. The company showcased some impressive financials including the following:

Cerberus Capital Management, the private equity backer of Albertsons, is working diligently to boost profits and overall sales as it most likely has an investor mandate to return profits. This will most likely come from a bid to take the company public. Although Cerberus attempted to take Albertsons public with the recent near-merger with Rite Aid earlier this year, it could still explore this option in the future. The company’s 2026 bonds are couponed at 7.750% and have a yield-to-maturity of over 9.5%. Considering Albertsons competitive position and aggressive pursuit of the e-commerce space, these bonds make an excellent addition to our Fixed Income 2 (FX2) Managed Income Portfolio, the most recent performance of which is shown below. 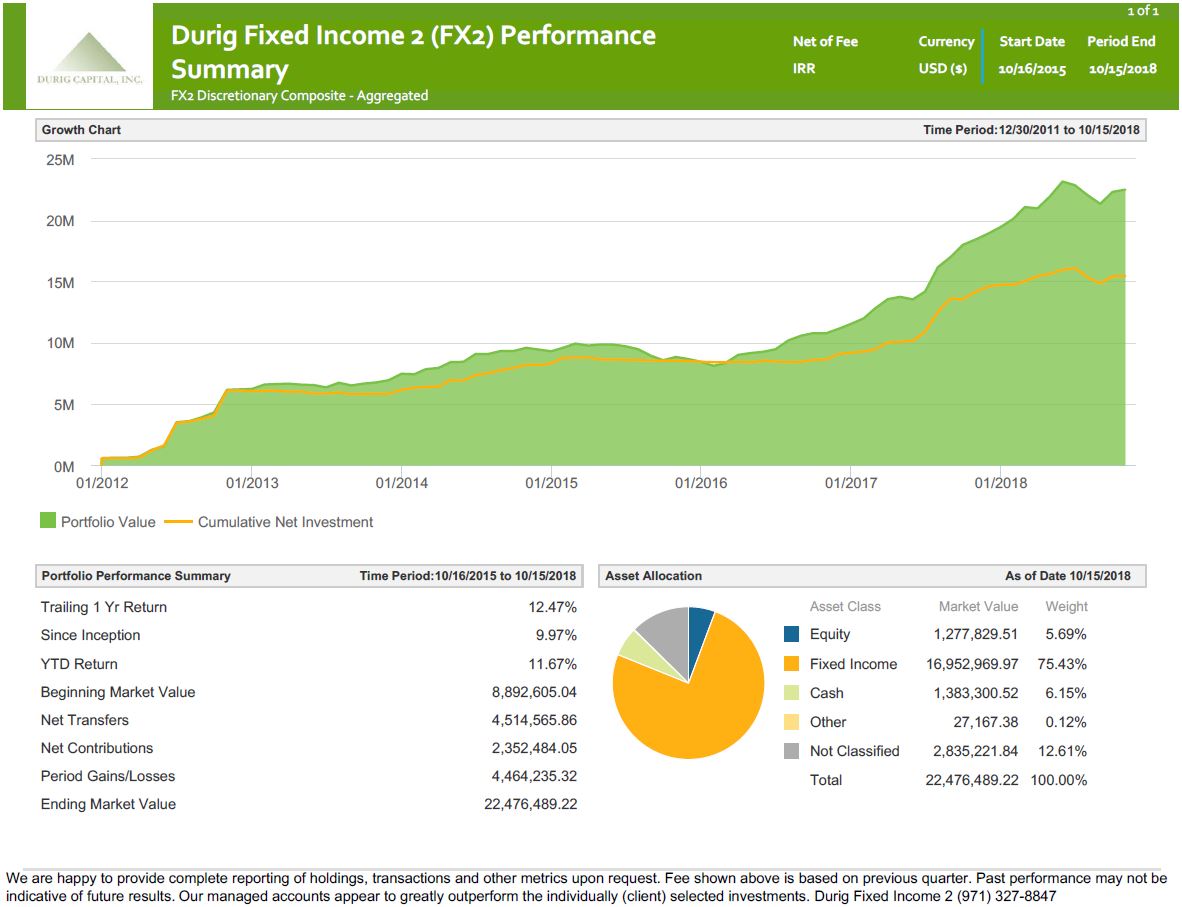 Update on the Rite Aid Merger

Early in 2018, a much anticipated merger between Albertsons and Rite Aid was announced. In August, Albertsons and Rite Aid mutually agreed to terminate the $24 billion merger. The decision came after Rite Aid shareholder opposition to the merger began to build in the months leading up to the shareholder vote scheduled for August 9th.  Apparently, Rite Aid shareholders and third party advisory firms did not believe Albertsons was offering sufficient consideration to Rite Aid shareholders under the terms of the merger. Since the termination of the agreement, changes have been made in both Rite Aid’s and Albertsons’ upper management. Albertson’s recently named its former Chief Operating Officer, Jim Donald, to take the helm as president and chief operating officer, replacing outgoing CEO Bob Miller, who will stay on as Chairman of the Board. At Rite Aid, the company revealed that it would name three new, independent directors to the company board at the company’s annual meeting this month. It is unclear if Albertson’s will pursue another merger or will focus strictly on organic growth.

Albertsons Companies is one of the largest food and drug retailers in the United States, with both a strong local presence and national scale. The company has more than 2,300 stores spread across 35 states as well as Washington D.C. The company operates under 20 well-known banners including Albertsons, Safeway, Vons, Jewel-Osco, Shaw’s, Acme, Tom Thumb, Randalls, United Supermarkets, Pavilions, Star Market, Haggen and Carrs. Albertsons Companies employs approximately 273,000 people and serves 34 million customers each week.  Albertsons is backed by New York based Cerberus Capital Management, a private equity firm. The company maintains corporate locations in Boise Idaho, Phoenix Arizona and Pleasanton California.

Albertsons recently posted its fiscal Q1 2018 results (for the sixteen weeks ending June 16, 2018). Here are some of the company’s highlights from its first quarter.

Albertsons also made huge strides in its e-commerce sales in its first quarter results. The company’s e-commerce sales, including sales of its Plated meal kits, more than doubled, growing by 108% over the same period in 2017.  Online grocery is growing and Albertsons has a solid opportunity to take a bigger piece of the pie.

According to a new research report from the Food Marketing Institute (FMI), nearly half of Americans now buy groceries online.  The report found that 49% of consumers had purchased consumer packaged goods online in the three months leading up to the report. Age also played a factor in online grocery shopping as millennials’ online grocery shopping rate was even higher at 61% and Gen Xers came in at 55%. Online grocery shopping has doubled in a little over a year. The same survey in 2016 revealed only 23% of consumers had purchased consumer packaged goods online. In fact, the FMI now forecasts that 70% of Americans could be purchasing online groceries as early as 2022. While more people are shopping online, these purchases are still a small piece of the total $1 trillion food and beverage market in the U.S. This year, it is estimated that e-commerce will capture approximately 5.5% of U.S. food and beverage sales. 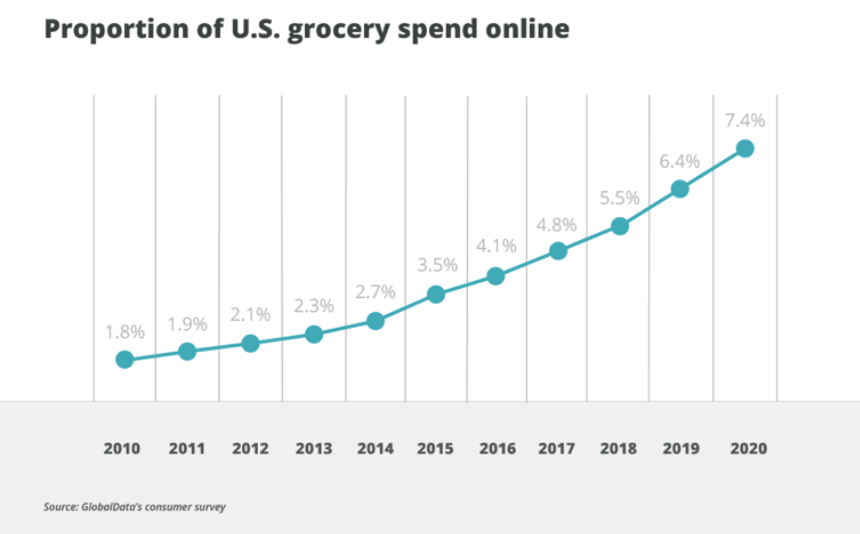 The company’s most recent earnings call revealed additional good news for Albertsons. First, shrinkage was reduced in Q1 by 45 basis points over Q4 2017. (Shrinkage for grocery stores is largely influenced by product that expires or is not fit for sale). Also, customer satisfaction is the highest it has been in four quarters. The company is automating several of its distribution centers that should result in improved efficiency and lower costs over time. Finally, Albertson’s private label products, Own Brands has over 700 additional items in the pipeline for the remainder of the year. Own Brands sales penetration was 24% in its most recent quarter, its highest quarterly rate to date.

Interest coverage is of paramount importance to bondholders as it indicates the company’s ability to pay the interest on its current debt levels.  For its fiscal Q1, Albertsons had $729.7 million in operating income (without the effects of non-cash depreciation and amortization). With the Q1 interest expense of $254.6 million, this gives an interest coverage of 2.9x.

Another measure investors look at is liquidity levels. During the company’s latest earnings call, management indicated that Albertsons current cash level is $1.2 billion. The company also has $4.0 billion available on its asset based revolver. This is an extremely healthy level of liquidity even considering the high operating costs of grocery retailers.

The default risk for bond investors is whether Albertson’s can continue to grow organically, increase its online presence, and increase its profitability. The company is continuing to remodel / update existing stores and open new stores where it sees growth opportunities. The demand for online grocery will continue to increase, and Albertsons is addressing this with increased investments in its own e-commerce capabilities, increasing the ways customers can shop and receive their groceries. Finally, the company is taking measures to reduce shrinkage and continues to drive down costs through operational efficiencies.  The company’s 2026 bonds, with a yield-to-maturity of more than 9.5%, offers investors high yields and diversification into an essential industry with one of the industry leaders. 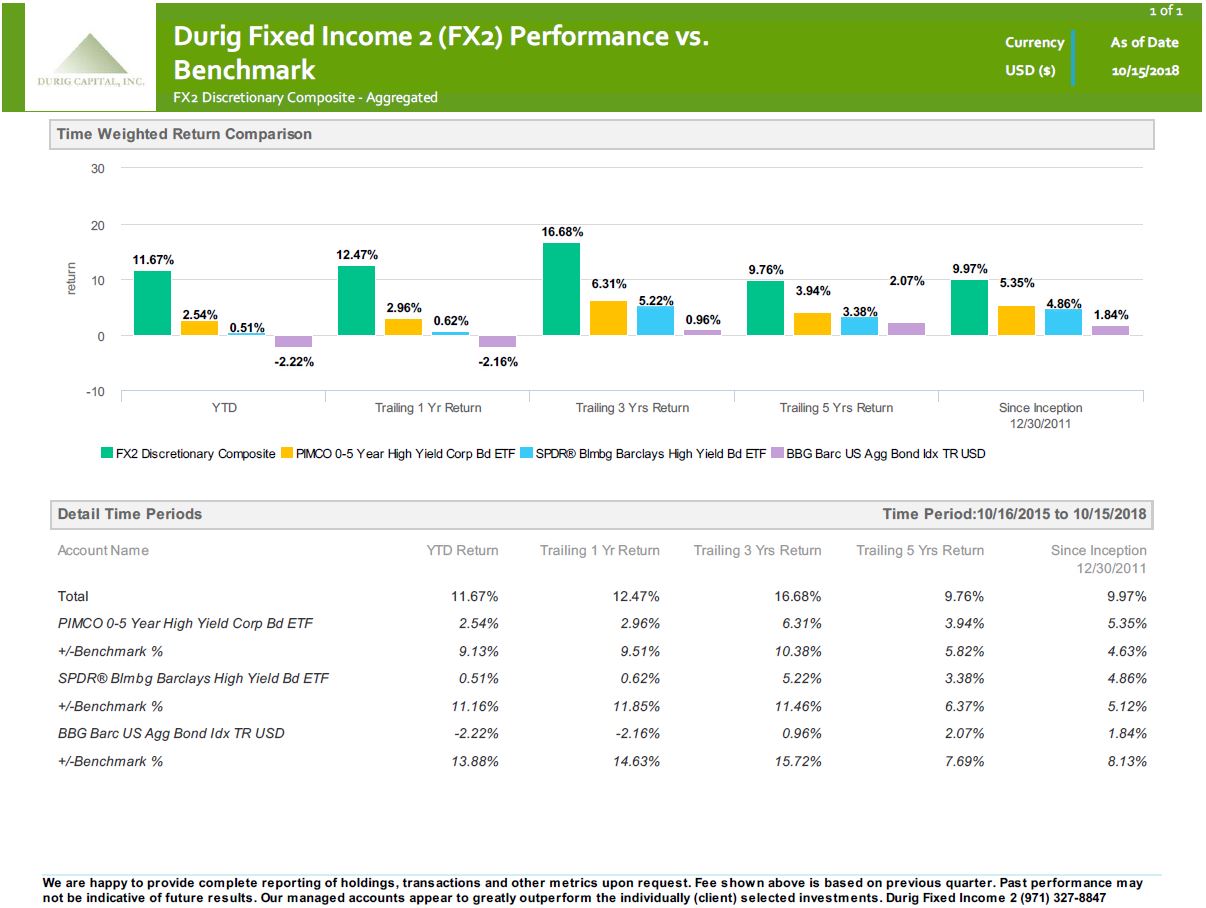 Albertsons and its associated company stores (Safeway, Vons, Tom Thumb, etc.) are well-known players in the grocery space. Notwithstanding the recently terminated merger with Rite Aid, the company continues on the growth path. It’s latest quarterly results show a company that is stringing together consecutive quarters of increased sales and adjusted EBITDA. It continues to increase its e-commerce offerings and is working diligently to reduce costs and improve margins. The company’s 2026 bonds are currently trading at a discount, giving them a yield-to-maturity of over 9.5%. With grocery being an essential industry, these bonds provide excellent diversification for Durig Capital’s Fixed Income 2 (FX2) Managed Income Portfolio, the most recent performance of which is shown above.

Please note that all yield and price indications are shown from the time of our research.  Our reports are never an offer to buy or sell any security. We are not a broker/dealer, and reports are intended for distribution to our clients. As a result of our institutional association, we frequently obtain better yield/price executions for our clients than is initially indicated in our reports.  We welcome inquiries from other advisors that may also be interested in our work and the possibilities of achieving higher yields for retail clients.