Stocks versus bonds – which is the better investment? This is a highly individual question and depends on the goals of the investor. For most investors, getting the best return with the least amount of risk is a goal worth striving for. But what is the best way to do this? While stocks have generally outperformed bonds, there are exceptions to the rule. Consider Durig Capital’s FX2 Managed Income Portfolio.

In the current market environment, with major stock market indexes at all time highs, many are nervous about what comes next given the decade long growth and expansion cycle. Diversification has always been important for investors, especially when the stock market goes south. And while its difficult to predict where the market will move next, investors looking for diversification would do well to consider Durig Capital’s FX2 Managed Income Portfolio.

If you look at how bonds have performed historically when compared to stocks, it’s easy to conclude that stocks, as an asset class, have outperformed bonds over time. 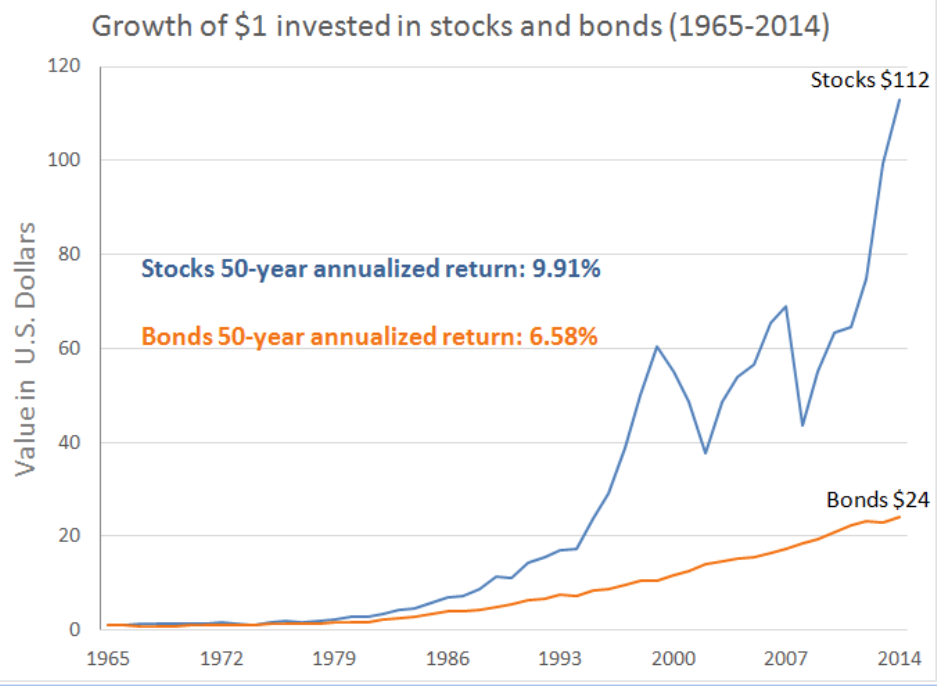 While the returns on stocks are certainly appealing, it’s also important to remember that, on average, bonds will generally be less volatile than stocks simply because their income flow is more certain than stock. Stocks have more unknown factors surrounding their performance, which in turn increases their risk factor and volatility. Although stocks have the potential, over time, to outperform bonds, investors need to remember that the potential for greater gain goes hand in hand with the potential for greater pain as well.

So, what would be the sweet spot for investors? An investment that has the decreased risk of bonds, with the upside of stocks. Where might an investor find this type of investment? Most likely in the world of professionally managed funds. But more often than not, fund managers find it difficult to consistently perform. Recent research conducted by the S&P and Dow Jones Indices found that active fund managers who outperform their benchmark in one year struggle to attain similar gains in the following years. 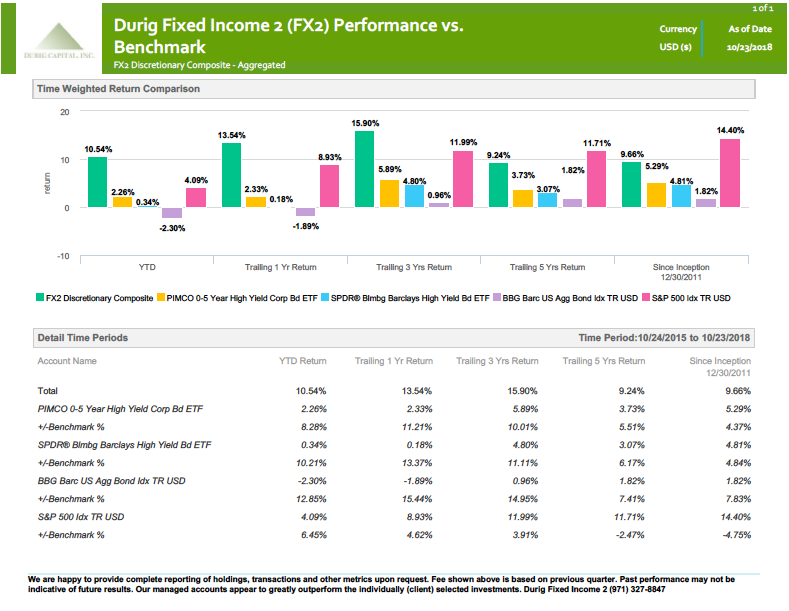 Not only has FX2 outperformed, but it has done so with half the volatility of the S&P 500. 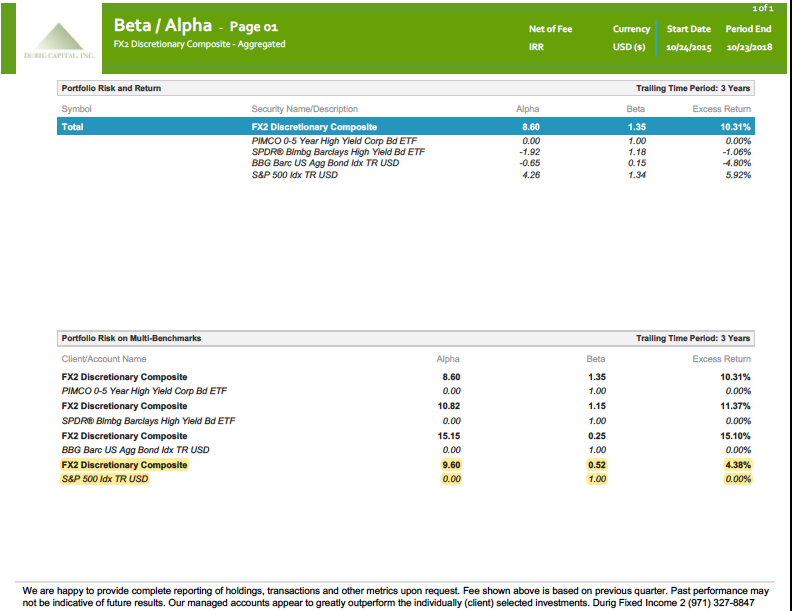 Why Hold Bonds in the Current Market

Considering the past few years, it’s easy to understand the temptation to focus only on stocks in your portfolio. At last check, the S&P 500 had increased four-fold from the lows it hit nearly a decade ago. In comparison, returns on bonds have been generally uninspiring with many bond strategies essentially flat over the same period, and yielding a lackluster 2% to 3% currently. And, as many investors know, over the long-term, stocks have delivered better returns as compared to bonds. So why consider bonds as part of your portfolio?

The biggest reason is to help mitigate risk. When the stock market is flying high, it is easy to forget the dread and “could haves” and “should haves” of a bear market. This year to date, the S&P 500 is up a mere 1.9%, and recently has been in negative territory when looking at its year to date performance. When a bear market does occur, stock values can be cut in half or more. When this happens, or even when a milder market correction occurs, bonds become a much more attractive asset.

The second reason to consider holding bonds is the “R” word – recession. Historically, the United States has hit a recession between one and ten years after the last one. Currently, we are at about the decade mark since our last recession. When recessions happen, or even in the months leading up to one, the stock market can suddenly turn downward, and the fact that our stock market is at high valuation currently could be a concern. But recessions can be relatively difficult to forecast. It seems we are due, and our economy is getting close to capacity. Also, recessions are likely when the Federal Reserve is in a pattern of raising interest rates. Rising rates are generally not a positive for bond investors, but if the U.S. should fall into recession, then bonds can be the steadying factor in an investment portfolio.

Most investors would agree that we are currently in an environment of rising interest rates. And for bond investors, rising interest rates are not looked upon as favorable, since, in general, bonds tend to lose money as rates go up. But the speed of interest rate increases is critical. Bond holders should be concerned only if rates rise more or faster than currently expected. Given that the investment community expects a few more rate increases within the next year, this is likely factored into market expectations and, in turn, to current bond prices.

How has Durig Capital’s FX2 Portfolio fared as interest rates have increased? Morningstar claimed that FX2 was the top performing Fixed Income SMA among its peer group in the last significant interest rate spike.

Additionally, Morningstar has ranked Durig Captial’s FX2 Portfolio as the top performing Fixed Income SMA for 1-year, 3-year, and 5-year returns as well as for Q1 and Q2 of 2018. This is amongst a peer group of over 800 Fixed Income SMA’s.

Another factor bondholders should consider is this – as a bond’s maturity date approaches, the bond’s price will increasingly reflect its full face value (or par). This phenomenon is why interest rates eventually lose power to affect the market value of a bond. So, how do bond investors shorten the time until maturity and reduce risk? One of the best ways is to buy old bonds that were issued many years back and are now merely a few years from maturity. The shorter the maturity, the less volatile a bond’s price will be.  The average maturity of bonds in Durig Capital’s FX2 portfolio is 2 ½ years. For many of these bonds getting close to maturity, interest rate risk is decreasing as they move closer to maturity. This translates to a less volatile portfolio.

Behind interest rate risk, the next biggest risk or fear for bondholders is default risk. This is when the issuer is in danger of not making its interest payments on its debt, but perhaps is also at risk of not repaying the principal to its bondholders. Durig Capital’s FX2 Portfolio has managed default risk for its investors through up and down markets by generating nearly half of its returns through principal gains. And this is even after accounting for the rare default as well as principal losses. Durig Capital achieves this by purchasing bonds from issuers that are less favored by the market, and as a result, their bonds are selling at significant discounts.

Bonds as Part of a Well-Balanced Portfolio

Stocks are the racecars of the investment world. Fast and flashy, they can also sometimes speed out of control. Bonds can be likened more to trucks – not as flashy, extremely useful, and will still get you to where you need to go. So why invest in bonds? Simply put, because having non-correlated assets within an investment portfolio provides better diversification and less portfolio risk. Investors looking to even out the risk in their portfolios should consider bond investing. On top of that, those looking for better than average returns on bond investments should consider Durig Capital’s FX2 Portfolio, which has shown outstanding returns with only a fraction of the volatility seen in stock portfolios.

One thought to “Finally, a Bond Strategy that Outperforms the S&P 500 with Half the Volatility of Equity”