This week, Durig Capital looks to the skies as it reviews an issuer that is focused on the design and manufacture of aircraft parts and systems. Triumph Group has spent the past few years shedding non-core business assets, consolidating locations and streamlining its operations with an eye to cost reductions. Its latest quarterly results showcase its progress on this journey. Its fiscal year 2019 first quarter results included the following:

Triumph’s long development cycle of the Bombardier Global 7500 wing is finally transitioning to production this year, moving from capital spend to revenue producer. Bombardier has reported that the long anticipated Global 7500 aircraft is sold out until 2021, with more orders likely to come. Triumph works with some of the biggest names in aeronautics including Boeing, Lockheed Martin, Gulf Stream and Bombardier. It has spent the past few years remaking itself. Its 2022 and 2025 bonds are currently trading at a slight discount, giving them a competitive yield to maturity of about 7.5% and about 8.8%, respectively. In light of Triumph’s transformation and its solid quarterly results, its 2022 and 2025 bonds make an ideal addition to Durig Capital’s Fixed Income 2 (FX2) Managed Income Portfolio, the most recent performance of which is shown below. 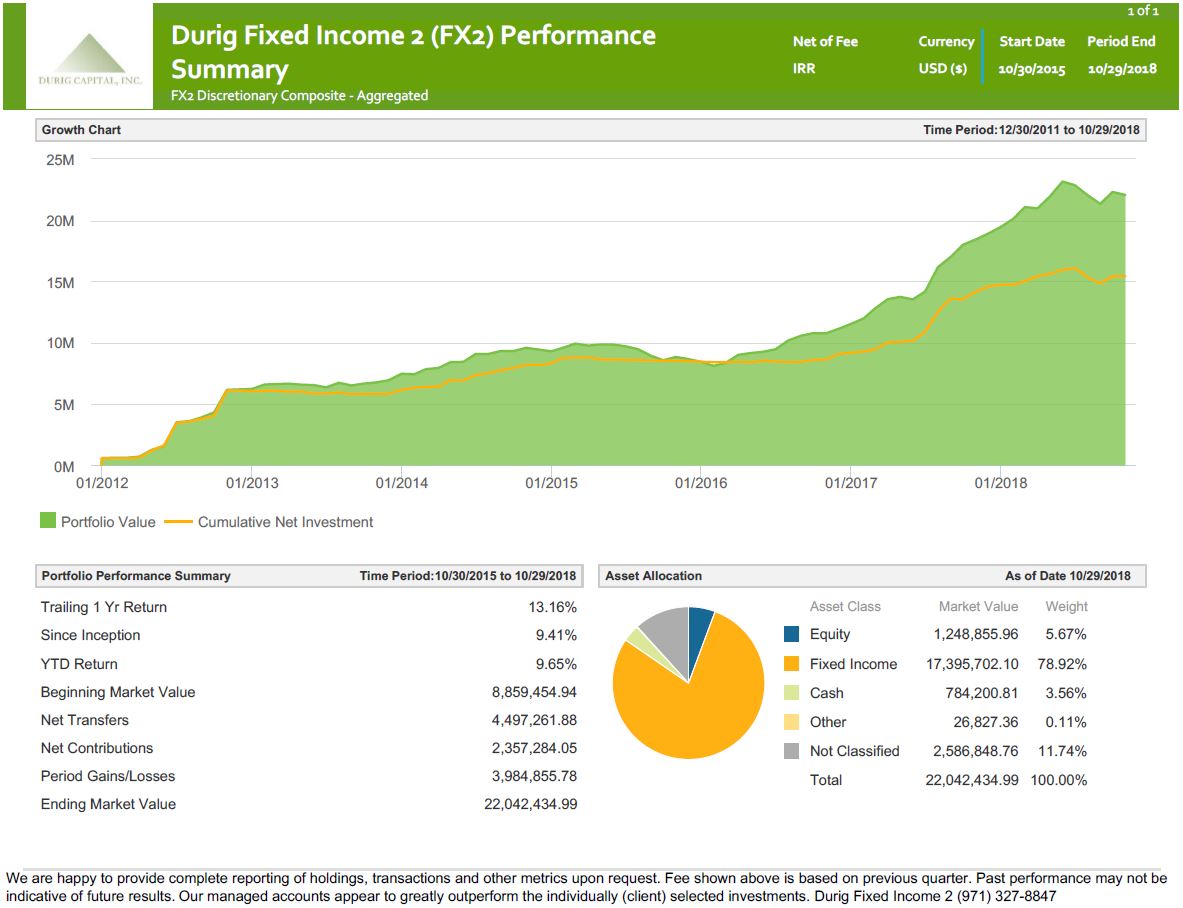 Triumph Group designs, engineers, manufactures, repairs and overhauls a broad portfolio of aircraft structures, components, accessories, subassemblies and systems. The company serves a broad, worldwide spectrum of the aviation industry, including original equipment manufacturers of commercial, regional, business and military aircraft and aircraft components, as well as commercial and regional airlines and air cargo carriers. The company is committed to enhancing Triumph’s performance and competitiveness in the marketplace, increasing its organic growth and becoming the partner of choice for current and future customers.

Triumph Group recently posted its latest quarterly results for the three months ending June 30, 2018. Coming up to the end of their multi-year transformation plan, the company had some solid results in its latest quarter.

After working diligently to transform the company over the past two years, Triumph Group is anticipating net sales for fiscal year 2019 of $3.3 billion to $3.4 billion as its development programs enter production, sales continue from current programs and new contracts offset waning programs. This represents an increase of 5% from fiscal year 2018 at guidance midpoint.

In 2016, Triumph Group embarked on a multi-year transformation with the goal of creating a lean company that focuses on its core competencies. Implementation of the “One Triumph” transformation sharpens the company’s focus, leverages its scale, and equips the company to improve performance and better meet customer commitments. The transformation aims to ensure Triumph will continue to be a global aerospace leader. Over the past two years, Triumph Group has simplified the company’s organizational structures, improved underperforming businesses to position them for sale and in some cases, for growth as part of Triumph. The company now has 20 operating companies, which is less than half of the 47 companies Triumph had in 2016. Over the same period, Triumph has reduced the number of company locations from 74 to 56 and occupancy by over one million square feet.

With the expectation of completing the transformation this fiscal year, Triumph actively has another $300 million of annual sales of divestitures in the pipeline for this year. When these divestitures are completed, the number of company locations could drop by an additional 10 or 15 sites.  This restructuring plan is anticipated to generate annualized savings of approximately $300 million per year in this fiscal year (2019) from facility consolidations, headcount reductions, operational efficiencies and supply chain optimization.

In 2011, Bombardier selected Triumph Aerostructures to design and build the wing for its new Global 7000 and Global 8000 long-range business jets. Fast forward to early 2017, with delays and cost overruns plaguing the project, Triumph eventually filed a lawsuit to get Bombardier to pay costs for its redesign of the wing in the middle of the project. In spite of this, the two companies were able to iron out their differences and have continued the work on the project. In late September, Bombardier received its Transport Canada type certification, and the company is now in full production of the Global 7500. U.S FAA certification is anticipated shortly, with delivery slated to begin before year-end. Incredibly, Bombardier has reported that the Global 7500 production is sold out until 2021. From Triumph’s side, management has reported that the capital spend on the 7500 project will continue to decrease over the next few quarters as they move to production and sales. This is great news as these funds will now go to free cash flow.

According to the 2017 Bombardier’s Market Forecast, one of the trends in commercial aviation will be the retirement of existing, aging fleets over the next 20 years. Replacing these aircraft with more modern airplanes that are more efficient will create significant demand in the 100- to 150-seat segment. Large fleet replacement needs already exist in the regional aircraft and small single-aisle segments. This trend will likely benefit Triumph Group as it designs and produces many different parts for commercial airplanes.

In addition, demand for consumer airline travel and air cargo continues to increase. According to a report by IATA, (International Air Transport Association) air travel growth is forecast to increase by 6% in 2018. This estimated figure for 2018 is above the average growth of 5.5% in the last 10-20 years. The report also gives an outlook on air cargo for 2018. Cargo revenues are forecast to increase to $59.2 billion in 2018 (estimated revenues for 2017 are $54.5 billion).

For the three months ending June 30, 2018, Triumph Group had operating income of $59.5 million (when removing non-cash charges for depreciation / amortization of $38.8 million as well as the one-time non-cash charge of $87.2 million for ASU 2017-7). Interest charges for the same period were $25.5 million for a coverage ratio of 2.3x. In terms of liquidity, as of June 30, 2018, Triumph had $33 million in cash and $543 million available on its revolving credit facility, for a total liquidity of $576 million.

The risk for bondholders is whether Triumph can complete its transformation, increasing revenues, profitability and free cash flow. The company, under the leadership of Daniel Crowley since early 2016, has done a masterful job of leaning out and focusing on its core businesses. There are still divestitures to be made before year end and the company should start to see significant savings in this fiscal year. Also, the increasing demand for air travel from consumers and cargo transport from companies should work in Triumph’s favor as they provide parts and services for a wide range of passenger and cargo aircraft. In consideration of these factors, Triumph Group’s 2022 and 2025 bonds make an ideal diversification tool for investors, with a yield-to-maturity of about 7.5% and about 8.8%, respectively. 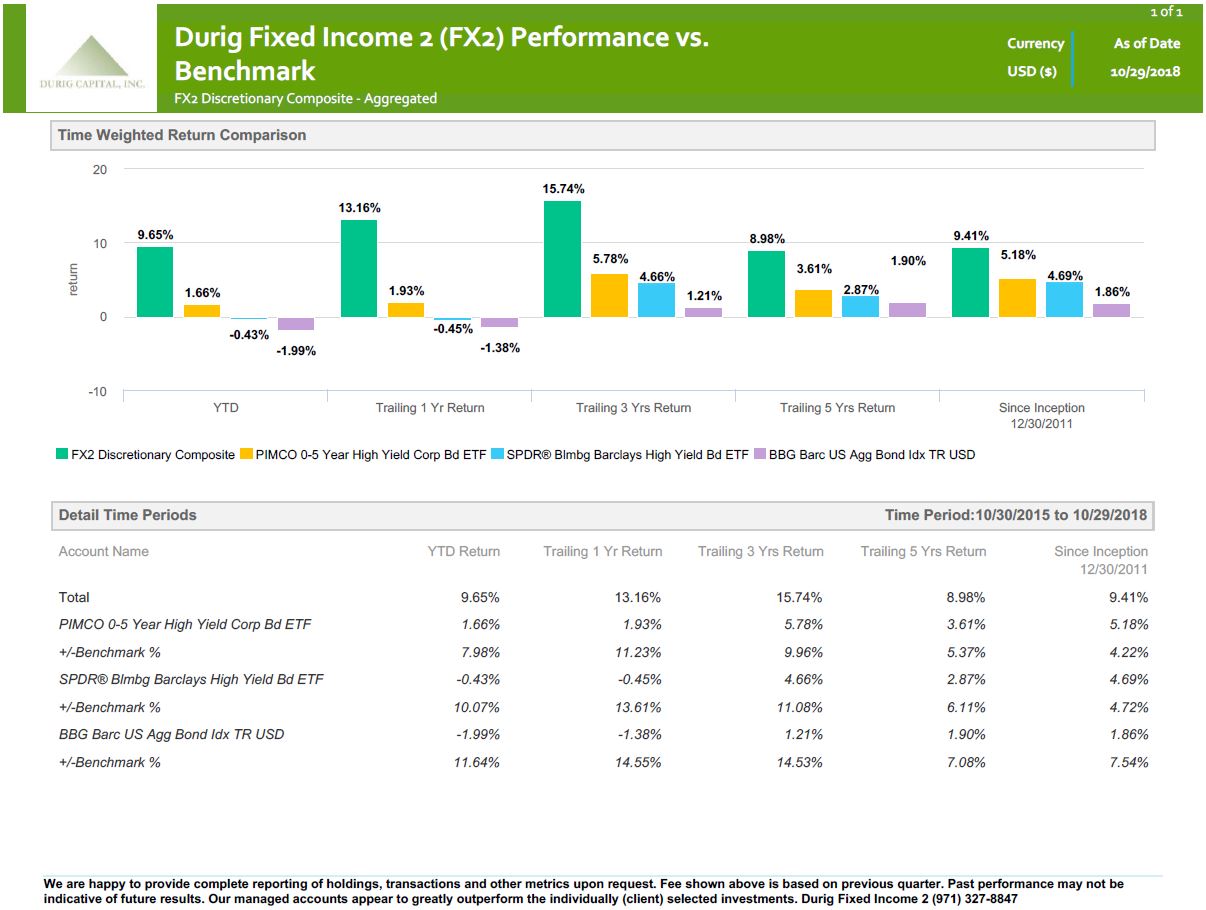 Triumph Group has done a masterful job the past two years transforming itself into a lean organization focused on its core competencies. The company aims to complete this transformation this fiscal year, and is looking to be cash flow positive by the fourth quarter of this fiscal year. The mammoth project of design and manufacture for the Bombardier’s Global 7500 wing should be transitioning to production phase this year. This will reduce the cash drain from this program and should begin generating revenue for Triumph. The company’s 2022 and 2025 bonds are currently trading at a slight discount, giving them a yield to maturity of just over 7.5% and about 8.8%, respectively. With Triumph’s recent wins, these bonds make an ideal addition to Durig Capital’s Fixed Income 2 (FX2) Managed Income Portfolio, the most recent performance of which is shown above.


Please note that all yield and price indications are shown from the time of our research.  Our reports are never an offer to buy or sell any security. We are not a broker/dealer, and reports are intended for distribution to our clients. As a result of our institutional association, we frequently obtain better yield/price executions for our clients than is initially indicated in our reports.  We welcome inquiries from other advisors that may also be interested in our work and the possibilities of achieving higher yields for retail clients.