This week’s bond review shines a light on the solar industry, focusing on the second largest solar company by revenues. Canadian Solar has experienced outstanding growth over the past few years, with revenues growing by nearly 19% between 2016 and 2017. In addition, the company is projecting revenue growth this year of over 35% over  last year. Growth has been driven by the large demands in China in recent years, but also increased demand in countries such as Brazil, Mexico and India. Canadian Solar’s first quarter results show the company is off to a solid start this year.

Around the world, governments are interested in increasing their share of renewable / solar energy. This bodes well for Canadian Solar. The company’s 2019 bonds mature in a short 6 months and have a current yield-to-maturity of about 7.50%. With an eye to diversification, these bonds make an ideal addition to Durig Capital’s Fixed Income 2 (FX2) Managed Income Portfolio, the recent performance of which is shown below. 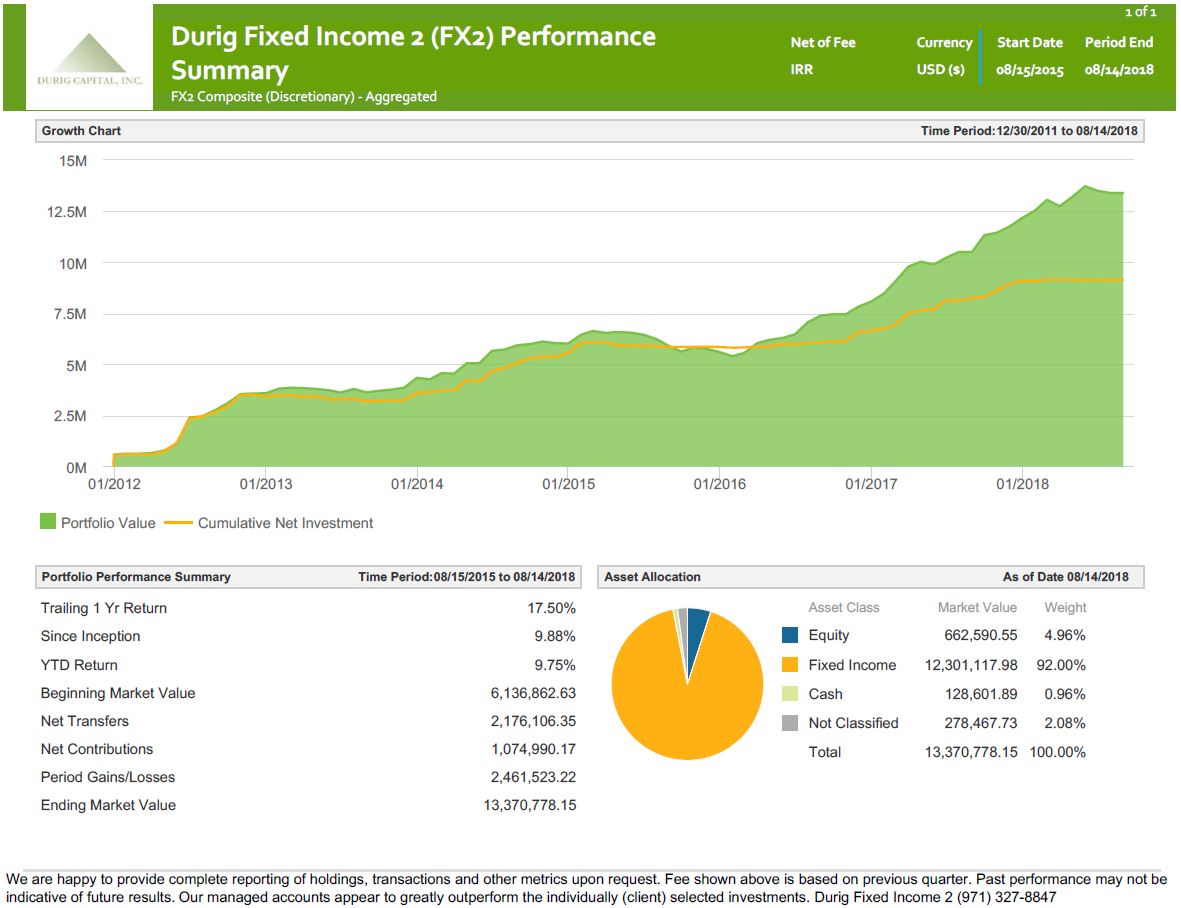 Dr. Shawn Qu, Chairman and CEO of Canadian Solar commented on the company’s first quarter results. “Results for the first quarter 2018 are within our expectations, with solar module shipments and revenue exceeding our guidance.”

Founded in 2001 in Ontario Canada, Canadian Solar is one of the world’s largest and foremost solar power companies. As a leading manufacturer of solar photovoltaic modules and provider of solar energy solutions, Canadian Solar also has a geographically diversified pipeline of utility-scale power projects in various stages of development. In the past 17 years, Canadian Solar has successfully delivered over 26 GW of premium quality modules to over 100 countries around the world. Furthermore, Canadian Solar is one of the most bankable companies in the solar industry, having been publicly listed on NASDAQ since 2006. The company currently employs over 12,000 people worldwide and was the second largest solar company by revenue in 2017.

Forecast for the Solar Energy Market

The growth in solar energy looks promising. According to the International Energy Agency (IEA), renewables accounted for almost two-thirds of net new power capacity around the world in 2016.  In 2017, renewable energy growth set a record year as well, mainly as a result of record solar photovoltaic (PV) deployment in China. New global solar PV capacity grew by 50% in 2017, with solar additions growing faster than any other fuel, surpassing the net growth in coal. Through 2017, China represented half of the solar PV demand globally, with the U.S. coming in as the second largest growth market in renewables.  Other global markets that are slated to increase their share of solar energy are India, developing nations in Asia, as well as sub Saharan Africa.

In addition to the growth of solar PV around the globe, another development will also help fuel growth and greater adoption. According to the Bloomberg New Energy Finance Analysis, the price of PV panels is expected to decline 34% in 2018. Experts also expect prices to fall even further, by another 10% to 15% in 2019. This decline is mainly due to solar industry reforms in China and is set to pave the way for greater commercial and residential use in many parts of the world. This trend could provide a tremendous boost to Canadian Solar’s global growth plan. 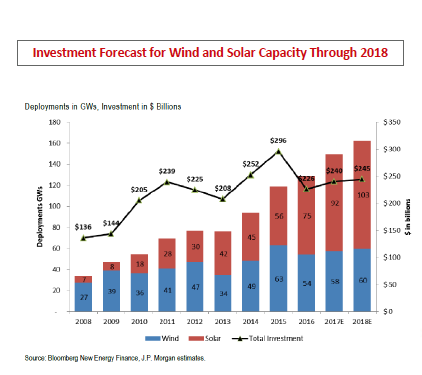 Canadian Solar has many late-stage projects underway at this time. (Late-stage implies projects that have off-take agreements and are expected to be completed in the next two to four years). Here is a partial list:

The company also has significant late stage projects in both Japan and China. These projects, when completed, should add significant revenues to Canadian Solar’s bottom line. 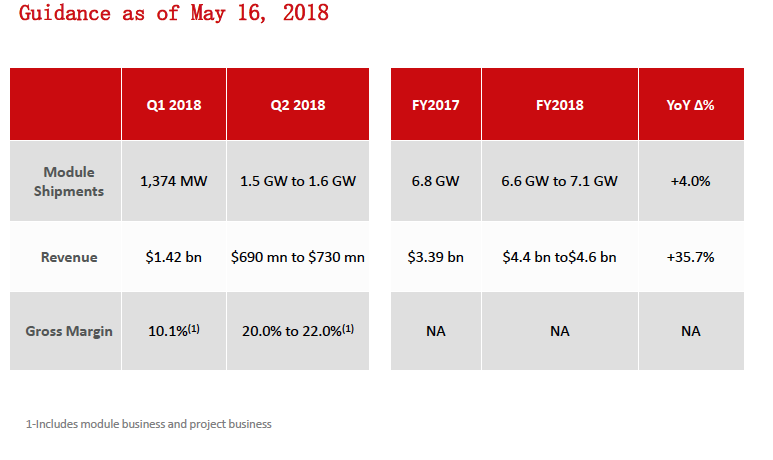 Interest coverage is of paramount importance for bondholders as it indicates a company’s ability to service its existing debt load. For the three months ending March 31, 2018, Canadian Solar had operating income of $78.2 million and interest expense of $29.6 million, for a very solid interest coverage ratio of 2.6x.

In terms of liquidity, Canadian Solar had cash, cash equivalents, and restricted cash balanced at the end of Q1 totaling $1.19 billion. Investors should note that this level of liquidity is more than enough to cover the outstanding balance of these notes.

The risk for bondholders is directly tied to whether Canadian Solar can continue it growth trajectory and related to this, whether the global solar industry continues to grow as well. Canadian Solar has wisely diversified its solar projects in many different countries – across Asia, Europe, as well as the Middle East and Africa. Revenues have been increasing over the past few years and the company expects that revenues will increase in 2018 as well. Also, with the 2016 passage of the United Nations Paris Agreement, many countries are beginning to invest more heavily in solar power. In light of these considerations, the about 7.50% yield-to-maturity on these 2019 bonds does appear to outweigh the risks identified.

In recent years, China has been responsible for half of global solar PV demand. Earlier this year, China’s government agencies that regulate its national solar policies terminated any new approvals for new subsidized utility-scale PV power stations in 2018. The policy changes are in response to the country’s ballooning subsidy costs, which totaled about $15.6 billion in 2017. China’s government has been unable to pay out these subsidies. This slowdown in what has been the biggest solar market may have direct effects on Canadian Solar. 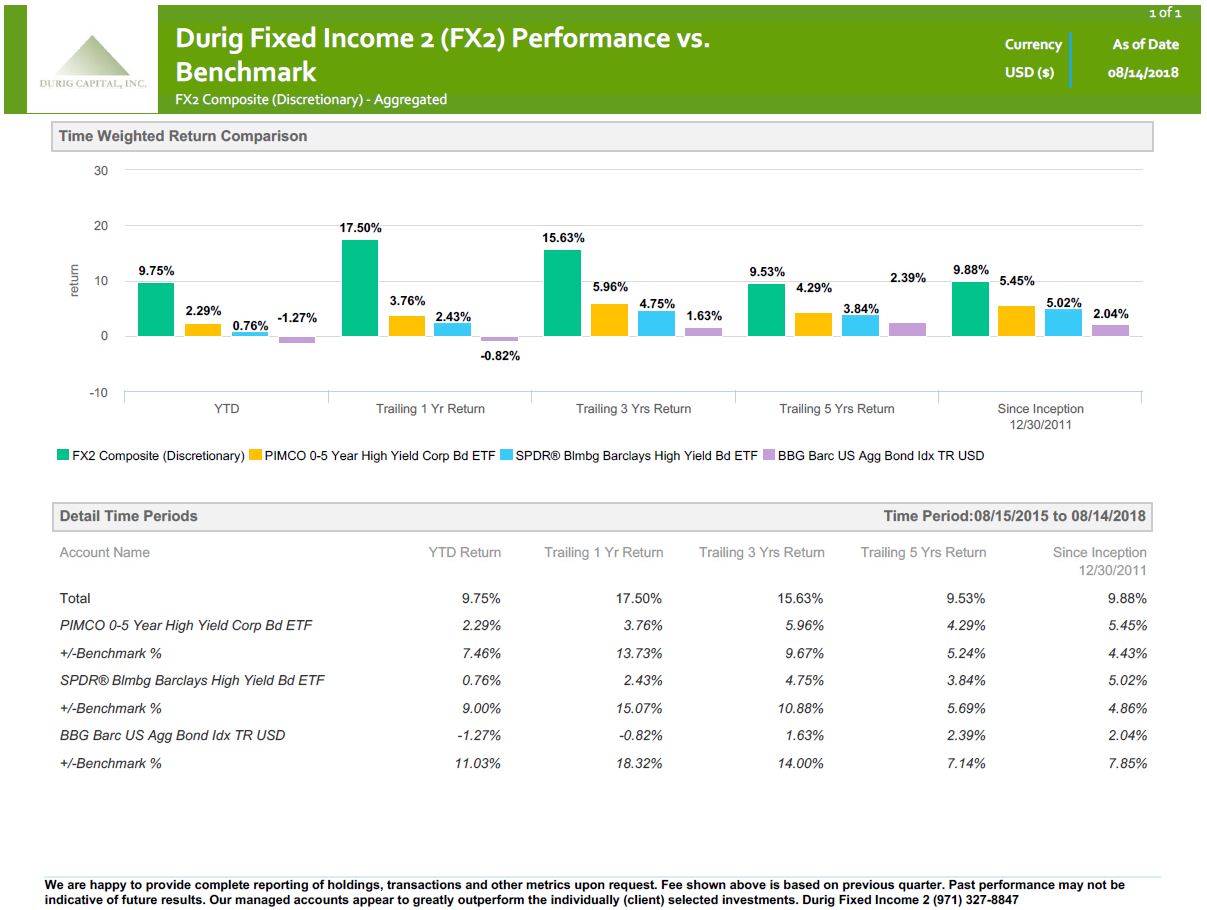 Canadian Solar is in a fantastic position to take advantage of the growth in solar power. Although growth has not been as expansive in the United States, solar power capacity is increasing in many countries all around the globe. The 2016 Paris Agreement, has likely fueled increased interest in solar power and Canadian Solar can certainly benefit from this increased interest. The company’s 2019 bonds, maturing in a short six months, are currently selling at a discount, giving them a competitive yield-to-maturity of about 7.50%. Considering this competitive yield, as well as the opportunity for additional portfolio diversification, these bonds make an ideal addition to Durig Capital’s Fixed Income 2 (FX2) Managed Income Portfolio, the recent performance of which is shown above.