This week, Durig Capital looks at a longtime company that has adopted a new name to reflect its new direction. Pyxus International, formerly Alliance One, is well into its “One Tomorrow” transformation plan, where it has added new products to its product base of leaf tobacco. The company has entered into producing e-liquids, cannabis and cannabis related products. The company recently released its results for its fiscal third quarter (three months ending December 31, 2018), and these show the new products are beginning to take hold.

Pyxus has fully committed to developing these alternative product lines and these new products are beginning to take hold. The company’s short-term bonds, maturing in July 2021, are currently trading at a discount, giving them a yield-to-maturity of about 14.75%. This outstanding yield makes these shorter-term bonds an ideal candidate for additional weighting in Durig Capital’s Fixed Income 2 (FX2) High Yield Managed Income Portfolio, which has historically done well in a rising interest rate environment, shown below. 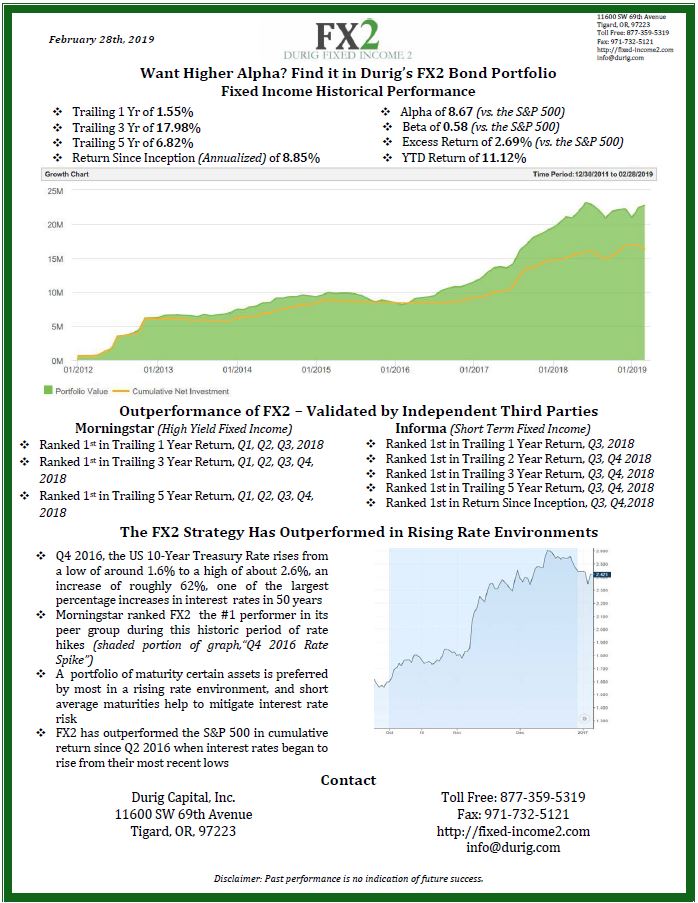 Pyxus’ most recently released quarterly results show a company experiencing growth from its newly added product lines. Pieter Sikkel, CEO of Pyxus commented on the company’s third quarter results. “It was the strongest third quarter sales we’ve had in the last four fiscal years.” The company showed both quarterly (three months ended December 31, 2018) and year-to-date improvements Here are some of the highlights:

Pyxus has been making excellent progress on its “One Tomorrow” transformation plan, adding additional product lines and revenue streams to its historic base of tobacco leaf sales.

Pyxus International (formerly Alliance One International) is a global agricultural company with 145 years’ experience delivering value-added products and services to businesses and customers. Pyxus is one of only two global publicly held leaf tobacco merchants. It holds a leading position in most major tobacco growing regions in the world, including the principal export markets for flue-cured, burley and oriental tobacco. As a result of this global scale, Alliance is well positioned to provide its product to manufacturers of tobacco products all over the world. The company has spent the last year diversifying its product offerings, launching into e-liquids, cannabis and cannabis related products. The company now has three reportable business segments; Leaf – North America, Leaf – Other Regions, and Other Products and Services.

The “One Tomorrow” Transformation Plan Update

It has been one year since Pyxus (then Alliance One) announced its “One Tomorrow” transformation plan. The goal of this plan was to pursue future growth opportunities for a company that was traditionally based around one commodity crop – tobacco. A second goal was to reshape the brand as “the trusted provider of responsibly produced, independently verified, sustainable, and traceable agricultural products and services.” In the past year, Pyxus has made significant progress, developing higher margin, fast-growing categories, while building upon the company’s strength in global tobacco leaf operations.

FIGR, Pyxus’ wholly owned Canadian cannabis producer, has continued to build its local capacity. The company has two planned expansions that is targeted to bring FIGR’s total annual production capacity to more than 100,000 kilograms, which will enable FIGR to quickly expand its presence throughout Canada and beyond, where legally permissible.

The company’s industrial hemp joint venture, Criticality, launched Korent, a new line of cannabidiol hemp Cannabis related products and e-liquid products. Criticality also continued construction of its 55,000 square foot facility in North Carolina. Korent is quickly gaining distribution. Also, as a result of the passage of the 2018 Farm Bill, which removed hemp from the the list of controlled substances at the federal level, banks and credit card companies can now conduct business with the hemp industry. E-liquids also continues its rapid growth, as evidenced by its double digit year-on-year growth.

Interest coverage for bondholders is of paramount importance because it indicates a company’s ability to service its current level of debt. For the most recent quarter, Pyxus had operating income of $39.4 million and interest expense of $34.0 million, for an interest coverage ratio of 1.2x. In terms of liquidity, as of December 31, 2018, Pyxus had total liquidity of $527.8 million, comprised of credit lines, letters of credit and cash.

The risk for bondholders is how quickly Pyxus can grow its new business to increase its bottom line. Revenues for the most recent quarter showed healthy growth of nearly 10%. The company is using excess cash to focus on debt reduction. Its new businesses are growing quickly and beginning to contribute to the company’s revenues. With the recent legalization of cannabis in Canada at the federal level and the recent passage of the U.S. Farm Bill, legalizing Cannabis related producst here in the U.S., the runway looks to be ready for takeoff for businesses like Pyxus who are producing and creating products for the consumer in that space. In light of these developments, the about 14.75% yield-to-maturity on these 2021 bonds does appear to outweigh the risks identified.

Like most commodities, the price of tobacco fluctuates. Over the past few years, on average, Pyxus has realized prices between $4.60 and $5.15 per kilo. Price volatility can affect Pyxus’ ongoing revenues.

Due to the current political climate, trade tensions with China have affected the import of U.S. tobacco into China. In April 2018, China raised the trade tariffs on American tobacco from 10% to 35%. With China making up a third of the world’s cigarette consumption, these tariffs have decreased the amount of tobacco American farmers can sell to China.

Weather can also affect amount of tobacco that is harvested. Last October, Hurricane Florence destroyed a significant amount of tobacco in the North Carolina region. This also affected Pyxus’ crops as evidenced by the company’s third quarter results from its North American Leaf business segment, which dropped from $121 million in Q3 FY2018 to $78 million in Q3 FY2019.

In general, bond prices rise when interest rates fall and vice versa. This effect tends to be more pronounced for lower couponed, longer-term debt instruments. Any fixed income security sold or redeemed prior to maturity may be subject to a gain or loss. Higher yielding bonds typically have lower credit ratings, if any, and therefore involve higher degrees of risk and may not be suitable for all investors. 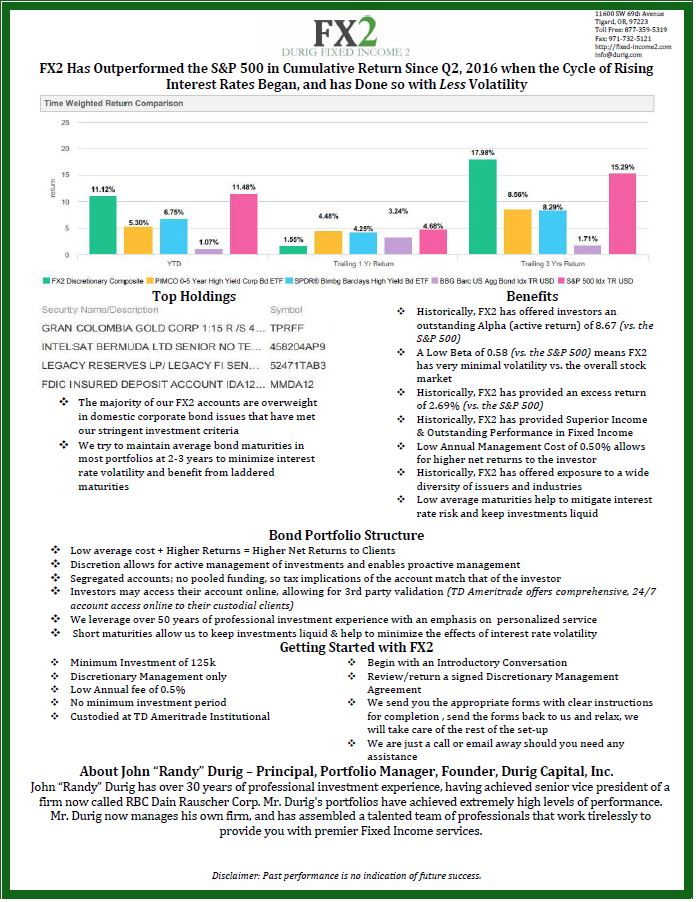 Pyxus International is a new company name for a long-term and experienced company. Pyxus continues to be a global leader in tobacco leaf production and sales. And now, it has entered into e-liquids, cannabis and cannabis related products. These new products have been assisted by recent legislation including legalizing cannabis in Canada and the U.S. Farm Bill which legalized at the federal level. The company is growing its alternative revenue sources. With the relatively rapid growth coming in Pyxus’ new product lines, the company’s short-term, 2021 bonds, which have a yield-to-maturity of about 14.75% are ideal for additional weighting in Durig Capital’s Fixed Income 2 (FX2) High Yield Managed Income Portfolio, which, historically, has been an excellent investment vehicle in a higher interest rate environment.

Durig's FX2 Is A High Yielding, Short Term, Low-Cost, Managed Income Portfolio, designed for performance. The FX2 Portfolio specializes in converting raw wealth into much higher levels of income, and in turn, increased quality of life for clients. Durig’s FX2 Portfolio has, over time been known to have historic periods of significant outperformance. As a fiduciary first and foremost, we provide our Advisory clients with a personalized fiduciary service at a very low-cost. Ask about our many services today!
http://fixed-income2.com/