Teekay Corporation has seen its revenues increase in the past few quarters due to increased demand for its services. And it is predicting continued increases based on spot rates for LNG shipping and tanker rates. The company’s 2020 bonds are currently trading at a slight discount giving them a yield-to-maturity of more than 9%. Based on its solid past few quarters, these 2020 bonds look to be an ideal addition to Durig Capital’s Fixed Income 2 (FX2) Managed Income Portfolio, the most recent performance of which is shown below. 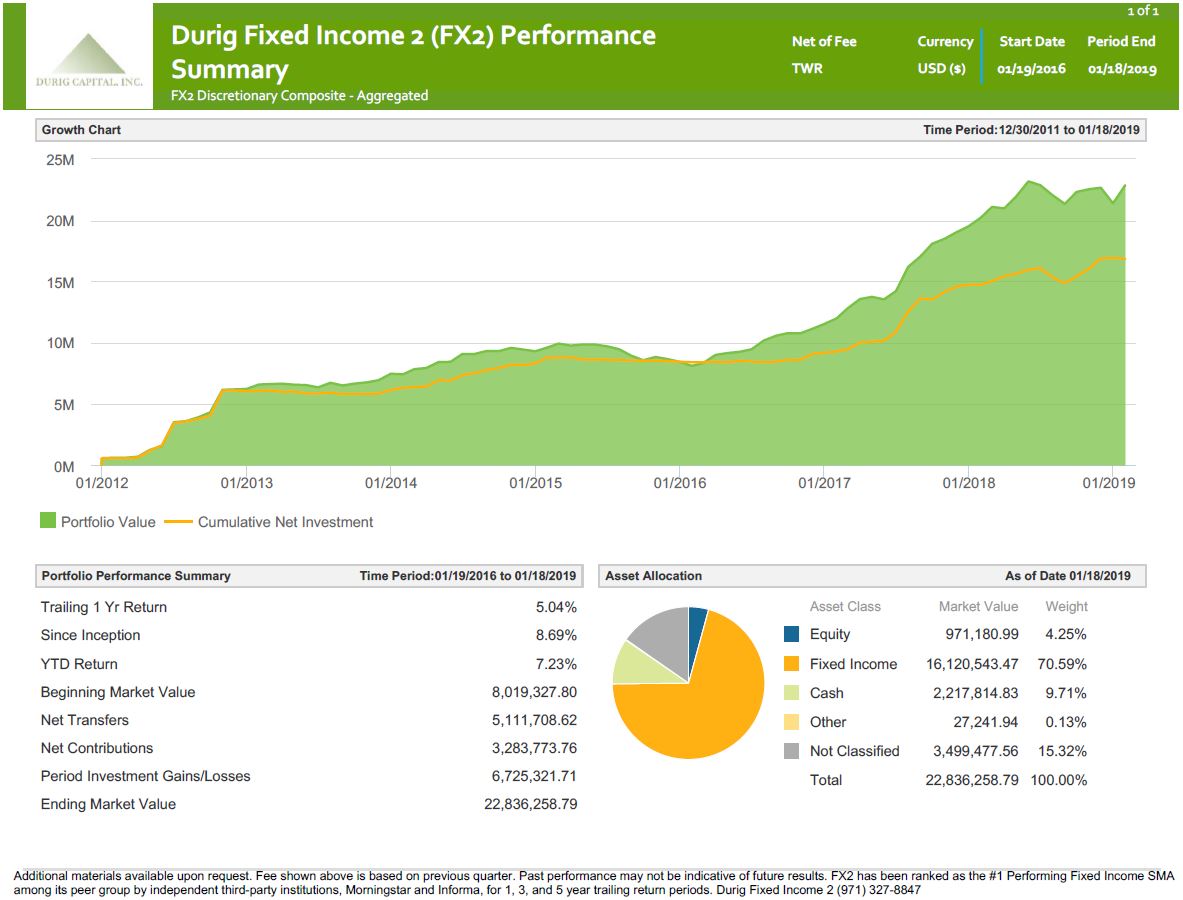 Other highlights from the third quarter included Teekay LNG’s decision to change its tax status from a partnership to a corporation, which should provide the company with additional options for raising capital as well as refinancing debt. Also, Teekay LNG intends to increase its quarterly cash distributions on common units by 36% in 2019 as part of a balanced capital allocation strategy. In addition to these points, during the third quarter, Teekay Corporation repurchased $45.8 million of these 8.5% notes.

Teekay LNG Partners (TGP), one of Teekay Corporation’s entities, appears on target for a fantastic 2019. With three new LNG carriers delivered in the last half of 2018 and another seven on way in 2019, the company stands to benefit from the healthy spot shipping rates for LNG carriers. In fact, Teekay LNG expects to grow annual CVFO (Cash Flow from Vessel Operations) by $150 million with the delivery of these additional carriers. This anticipated increase is expected to naturally de-lever the company’s balance sheet. TGP has already begun to show increases in its operational cash flow from its most recent quarterly results. In its third quarter 2018, the company had CVFO of $132.6 million, adjusted net income of $19.5 million or $0.16 per common unit, representing increases of 15%, 44%, and 78% respectively over the second quarter 2018.

Teekay Tankers (TNK) also posted a solid Q3 and is looking at excellent prospects in 2019. TNK reported third quarter total CVFO of $28 million, an increase of $17 million over Q2. Crude tanker rates strengthened during Q3 and into Q4. If spot tanker rates stay at the levels from Q4, TNK estimated free cash flow per share would increase to over $1 per share over the next 12 months.

Over the past few years, the U.S. has vastly increased its exports of liquefied natural gas (LNG).  In 2017, LNG exports from the U.S. quadrupled to 1.94 billion cubic feet per day (bcf /d) from 0.5 bcf/d in 2016. According to S&P Global Platt, it expects that total exports in 2018 will have topped that amount handily. The country’s first major LNG export terminal, Sabine Pass on the Texas / Louisiana border was the country’s only LNG export facility until April 2018 when the Cove Point LNG Terminal opened in Maryland. On the heels of that facility’s opening, there are at least four more facilities that will open in the next few years within the U.S. There is also an additional, mega-LNG port facility underway in Canada worth more than $30 billion led by Royal Dutch Shell. An increasing number of export terminals translates to additional need for LNG carriers to transport LNG to its ultimate destination, which could benefit Teekay Corporation.

Driving this growth in U.S. exports is global LNG demand. LNG is quickly becoming the fuel of choice for many industrial nations. LNG trade increased by 22% between 2014 and 2017 and is predicted to increase an additional 21% by 2020. In 2005, only 15 countries imported LNG. Now that number has more than tripled. Most of the demand increase is coming from Asian countries like China and Japan.  In fact, China has plans to increase its share of natural gas in its energy mix from a targeted 10% by 2020 to 15% by 2030. China’s consumption and production of natural gas have both increased, but a supply gap has continued to increase since 2009, necessitating the country’s increased imports.

In its most recent quarter, Teekay Corporation had operating income (without the effect of non-cash depreciation) of $18.4 million and interest expense of $15.0 million for an interest coverage ratio of 1.2x. In terms of liquidity, Teekay Corporation had total liquidity as of September 30, 2018 of $389.9 million (consisting of $191.1 million of cash and $198.8 million of undrawn credit facility).

The risk to bondholders is whether Teekay Corporation can continue to grow its revenues. The company receives dividends from each of its subsidiaries each quarter and its subsidiaries businesses are beginning to see growth due in large part to increased spot rates in LNG shipping and tanker rates. In addition, Vince Lok, Teekay’s CFO, indicated in the last earnings call that they expect “consolidated results to be stronger in the fourth quarter compared to the third quarter due to higher forecasted earnings in each of our daughter entities.” With results seemingly improving, the over 9% yield to maturity on the company’s 2020 bonds appears to outweigh the risks identified. 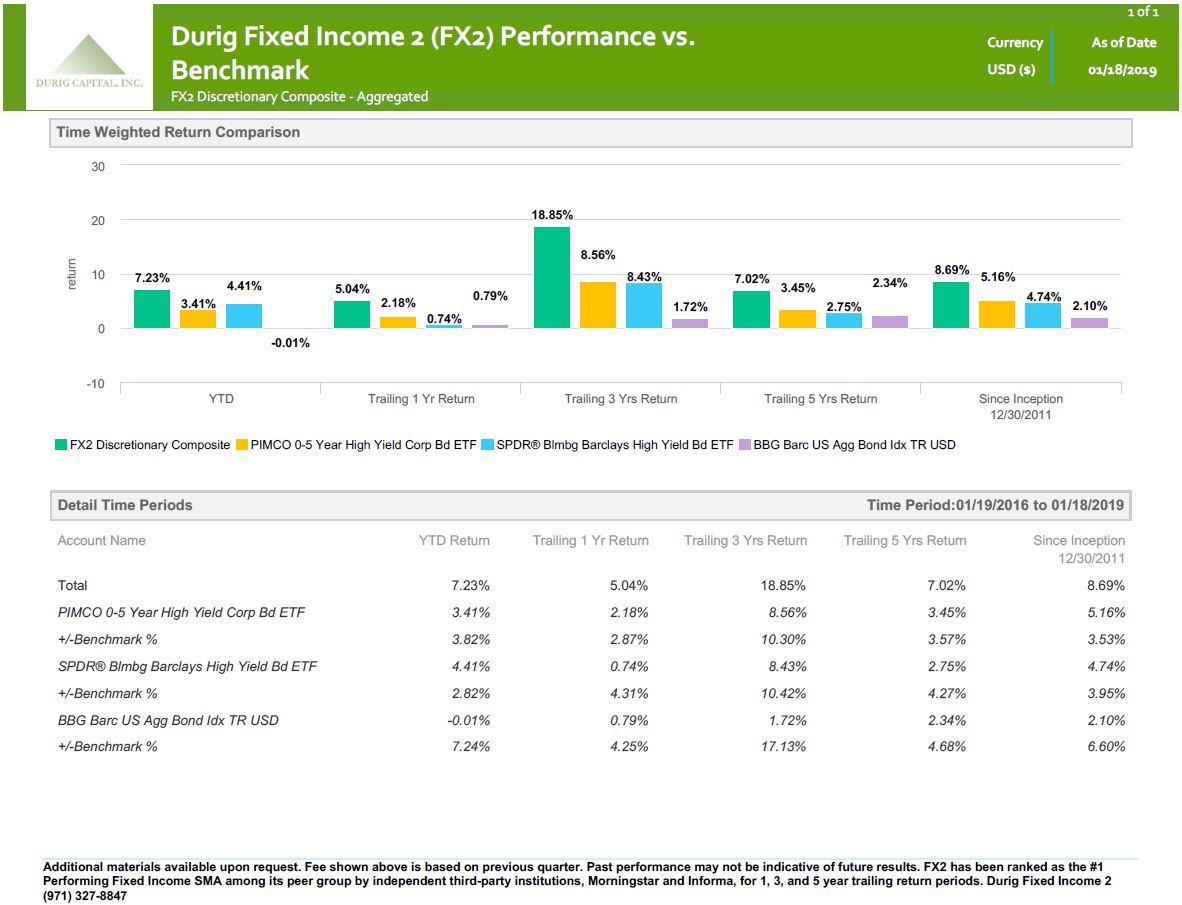 Teekay Corporation is riding the wave of increased commodity pricing, increased spot pricing for LNG shipping and tanker rates, as well as increased global demand for LNG. The company is taking advantage of these increases by putting more carriers and tankers in the water to meet the demand. The company expects Q4 results to increase over Q3, which should add up to a successful year for the oil and gas transport company. With a very competitive yield to maturity of over 9%, the company’s 2020 bonds represent an excellent opportunity for diversification and as such these bonds are an ideal candidate for Durig Capital’s Fixed Income 2 (FX2) Managed Income Portfolio, the most recent performance of which is shown above.

Disclaimer: Please note that all yield and price indications are shown from the time of our research.  Our reports are never an offer to buy or sell any security. We are not a broker/dealer, and reports are intended for distribution to our clients.

One thought to “Load Up On Over 9% YTM from Teekay Corporation, Bonds Mature January 2020”