This week, Durig Capital takes a second look at an issuer involved in the design and manufacture of semiconductors. Magnachip Semiconductor (NYSE:MX) has been around for over three decades and is currently the largest independent supplier of OLED display drivers to panel makers for smartphones. The company is riding the wave of transition from LED to OLED in the smartphone world. This has paid handsomely as its full year 2018 results can attest (above). In addition, the company’s first quarter also posted continued wins for its Standard Products division.

MagnaChip recently revised and significantly increased its guidance for Q2. This is good news considering the ongoing strategic evaluation of its Foundry Services business. The company’s 2021 bonds are currently trading at a slight discount and have a very competitive yield-to-maturity of about 7.25%, making these and ideal candidate for addition weighting in Durig Capital’s Fixed Income 2 (FX2) High Yield Managed Income Portfolio, the aggregated performance of which is shown below. 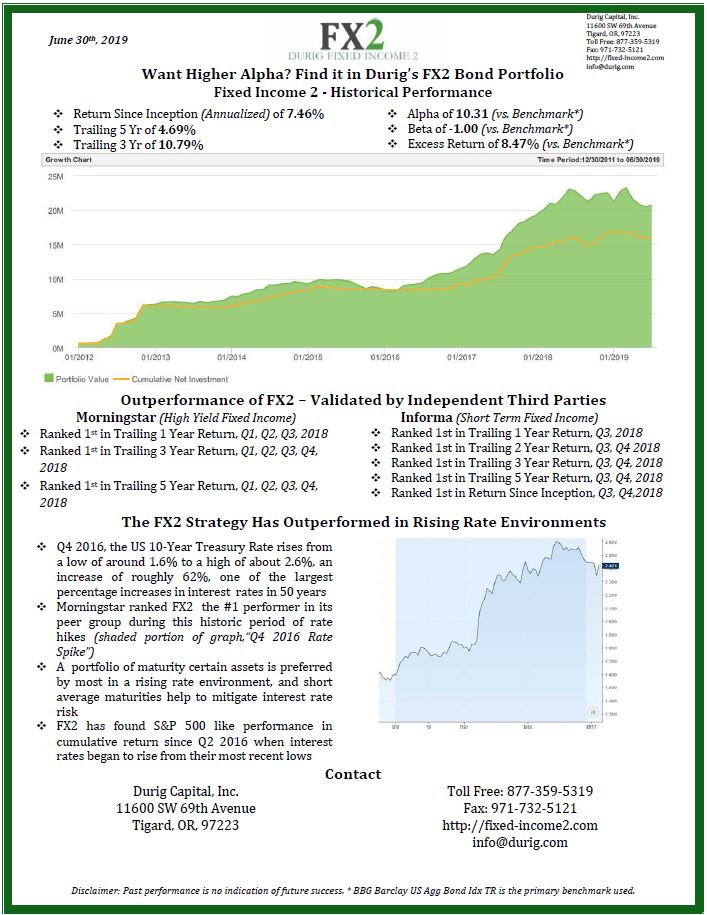 An Update on MagnaChip – FY 2018 and First Quarter Results

Since Durig Capital’s last review on MagnaChip, the company has released both its full year 2018 results as well as its first quarter 2019 results. The company recorded a successful year in 2018.

The company also saw wins in its first quarter results.

During Q1, MagnaChip also began forming an OLED initiative to optimize the functionality of OLED display solutions across a wide range of products -smartphones, mobile devices, IoT (internet of things) and automotive. The ultimate goal is to improve MagnaChip’s competitive position in the marketplace. Three partner companies have signed on so far including ELAN Microelectronics, HiDeep, and Melfas. Each partner company will collaborate with MagnaChip to develop and standardize interface solutions based upon smart touch, stylus, and fingerprint technologies.

MagnaChip recently provided an update to its second quarter 2019 guidance. The company’s original guidance stated revenues between $173 million and $181 million and gross profit margin in the range of 16% to 18%. New guidance predicts revenues of at least $194 million and gross profit margin to be at least 21%. These increases are said to be due to the company’s revenues from OLED display drivers and Foundry services. In addition to this, revenues from the company’s Power standard products is also expected to reach beyond original estimates. This guidance increase for Q2 indicates continued strong demand for MagnaChip’s products.

Magnachip Semiconductor (NYSE:MX) is a designer and manufacturer of analog and mixed-signal semiconductor platform solutions for communications, IoT (Internet of Things), consumer, industrial and automotive applications. The company provides technology platforms for analog, mixed-signal, power, high voltage, non-volatile memory, and RF applications. MX has a proven record with over 30 years of operating history, a portfolio of approximately 3,000 registered patents and pending applications and extensive engineering and manufacturing process expertise. The company reports its financial results in two operating segments: Foundry Services Group and Standard Products Group. The company is based in South Korea and derives a vast majority of its revenues from Korea and other Asia Pacific markets. The company is the largest independent supplier of OLED display drivers to panel makers for smartphones and is also the leading provider of battery protection discretes for a global smartphone maker.

In its previous earnings call (for Q4 and FY 2018 results), MagnaChip indicated that it is conducting a strategic evaluation of the Foundry business and its Fab 4 facility. Since that time, the company has retained financial advisor, JP Morgan and attorney Paul Weiss to assist them in this process. The company and its Board is looking at all alternatives for its Foundry business including, but not limited to, joint ventures, strategic partnerships as well as mergers and acquisition possibilities. The company’s Foundry business did underperform in the first quarter. This was expected and was attributed to inventory correction by customers and softening global market conditions, as well as the company being more selective about new Foundry business during the strategic evaluation process.

To date, no additional developments have been announced from MagnaChip, but earlier this year, there were news reports circulating that South Korea’s SK Hynix Inc. had expressed an interest in a possible purchase of the company’s Foundry business. However, there have been no additional reports to confirm the transaction from either side.

MagnaChip both designs and manufactures an integral component for OLED display panels. The DDIC (Display Driver Integrated Circuit) controls the OLED display panel. This crucial component was developed in cooperation with Samsung Display beginning in 2003. Since that time, MagnaChip has continued to expand its expertise in OLED DDIC’s and holds various key patents giving the company a technology edge over other competitors that have since entered the OLED space. MagnaChip now supplies this integral component to Samsung Display, consolidating its leading position in the OLED DDIC market. Currently, Samsung has accumulated 93% of the smartphone OLED market. Even rival Apple gets its displays from Samsung.

Also, the use of OLED screens in mobile devices is still growing.  In 2016, 40.8% of smartphones contained OLED screens. In 2019, that figure is projected to reach 50.7%. This momentum is expected to continue in the coming years. By 2025 the OLED penetration rate is predicted to reach 73%.

Most everyone has heard of 5G, the next evolution in cellular network technology that provides broadband access. What 5G means for most people is FAST – fast downloads, seemingly instant access to content, videos, gaming,  you name it. And just as people rushed to buy the latest and greatest mobile devices (mainly smartphones) when 4G became the latest tech craze, many industry analysts expect a similar upgrade cycle once 5G becomes more widely available. In fact, in a recent survey, 87% of mobile users said they plan to upgrade their phones to a 5G enabled device, with 78% saying they are willing to pay more for a device with 5G capabilities. While certain cities in the U.S and around the globe are already equipped with 5G capability, it is still fairly limited in its availability. How will this benefit MagnaChip? Along with the continued migration from LED of OLED screens in most smartphones, a new wave of 5G capable smartphone purchases from global consumers has the potential to be a net positive for the company.

For a bondholder, interest coverage is an indication of how well an issuer can cover its existing debt obligations. For its full year 2018, MagnaChip had operating income of $47.4 million and interest expense of 22.3 million for an interest coverage of 2.1x. In terms of liquidity, as of March 31, 2019, MagnaChip had cash and cash equivalents totaling $105.8 million. This amount of cash is over four times the company’s annual interest expense, which puts the company in a solid position to weather any variability in its cash flows.

The risk for bondholders is whether MagnaChip can continue to build on the solid results it recorded in 2018, while considering strategic alternatives for its Foundry business. For the first quarter, Foundry Services made up 36.3% of net sales. Granted, this division of the company had a significant decrease in first quarter revenues year-over-year due to customer inventory builds as well as a more selective new business pipeline due to the ongoing strategic evaluation. However, if a sale is in the works, MagnaChip will need to cover the lost revenue. On the other hand, OLED DDIC revenues jumped by 41.5% year-over-year and revenues from premium power products also increased by a whopping 46% in Q1. These are just a few of the drivers that could potentially fill that gap. With OLED display usage increasing as well as the looming widespread adoption of 5G, there looks to be ample opportunity for MagnaChip to increase its revenues. The company’s 2021 bonds offer investors both diversification and competitive returns due to their excellent 7.25% yield-to-maturity. 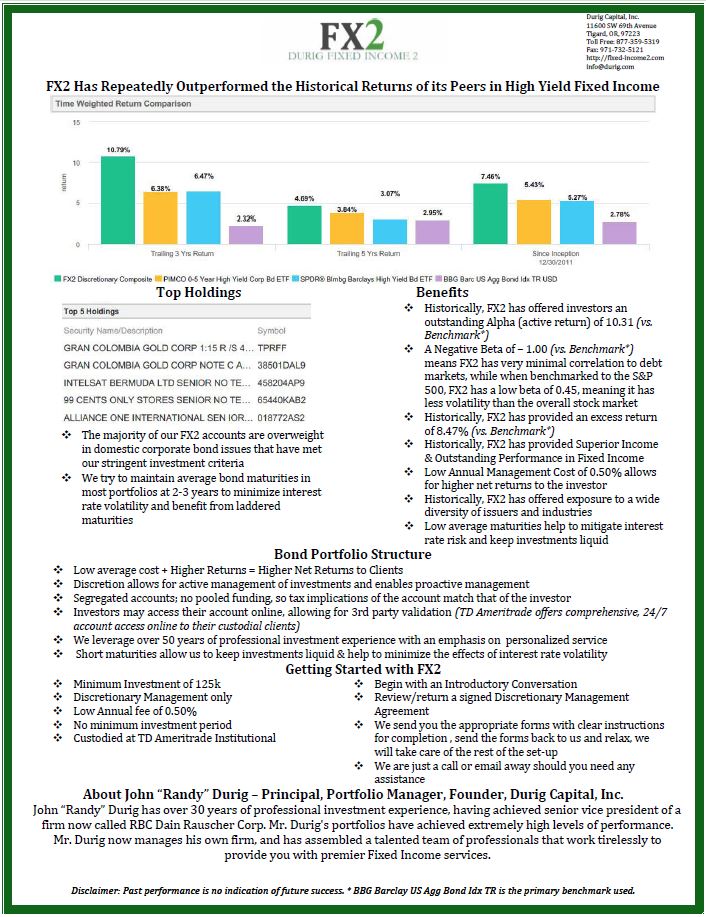 In the sometimes volatile world of technology, MagnaChip has been posting some pretty solid results. The company’s full year 2018 results saw impressive increases in revenues, and adjusted EBITDA as well as record revenues for both its OLED products and power products. In the first quarter of this year, OLED revenues continued to soar, increasing by 41.5% year-over-year. And the company just released updated and increased guidance for its second quarter. While the investment world awaits the fate of the company’s Foundry Services segment, it looks like MagnaChip has taken the right steps to ensure its continued profitability and longevity. At present, the company’s 2021 bonds have an outstanding yield-to-maturity of over 7%, are an ideal candidate for additional weighting in Durig Capital’s Fixed Income 2 (FX2) High Yield Managed Income Portfolio, shown above.