Parker’s second quarter results were primarily driven by the company’s rental tools segment. During Q2, this segment grew at a higher rate than the U.S. rig count. Increased activity in the major shale basins are most likely driving the increased demand for Parker’s products. With the price of oil somewhat stable, Parker is investing additional amounts in its rental tools segment, given its good margins and quick return on investment. The company’s 2020 bonds are trading at a significant discount, giving them a fantastic yield-to-maturity of over 13.25%. With this excellent yield, these bonds are ideal for additional weighting in Durig Capital’s Fixed Income 2 (FX2) Managed Income Portfolio, the most recent performance of which is shown below. 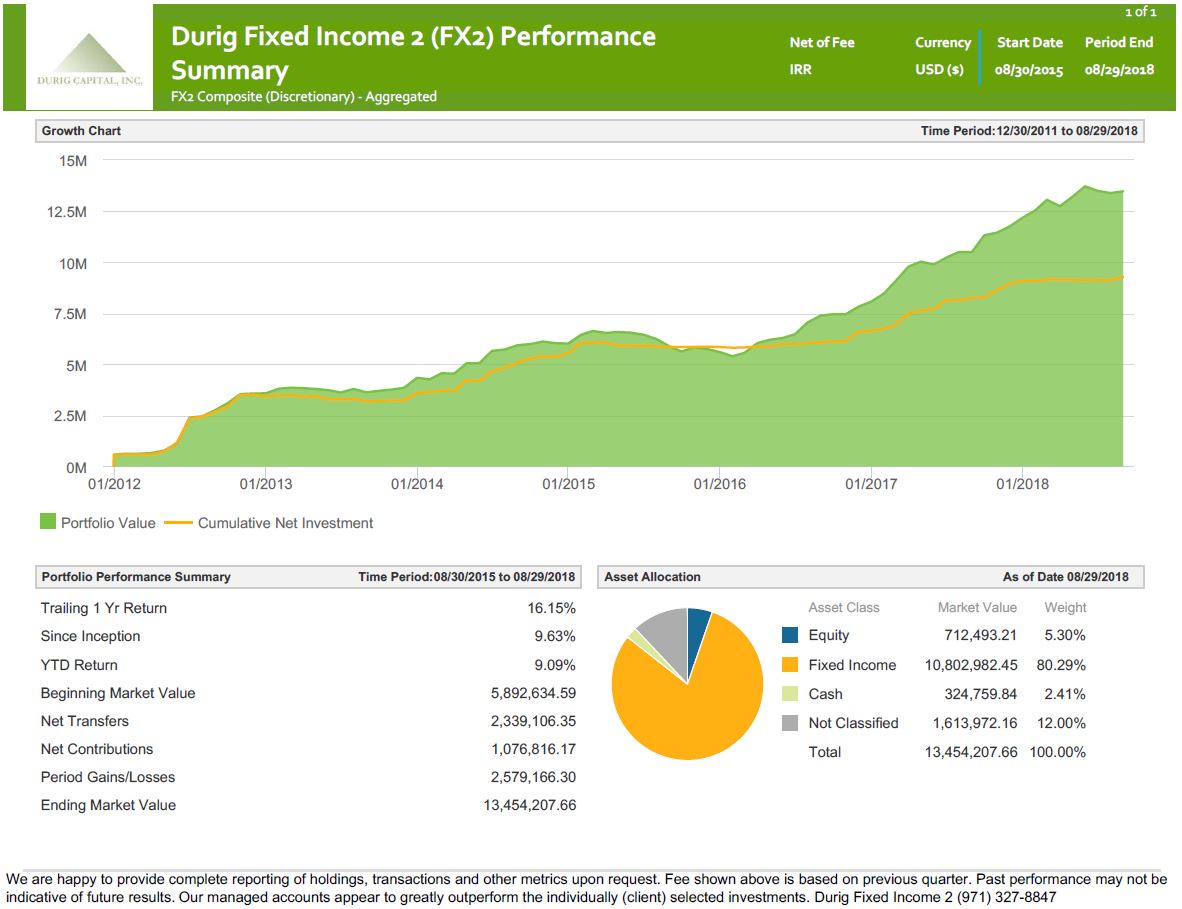 Founded in 1934, Houston-based Parker Drilling is an international provider of contract drilling and drilling-related services and rental tools.  The company has three business segments – US Drilling, International & Alaska drilling and Rental Tools. Parker is among the most geographically experienced expertise in drilling geographically difficult wells and in managing the logistical and technological challenges of operating in remote, harsh areas.  Its rental tools business supplies premium equipment to exploration and production (E&P) companies, drilling contractors and service companies (both on land and offshore) in the United States and in select international markets. For 2017, drilling revenues (U.S., Alaska and International) made up 58.7% of total revenues, and Rental Tools Services made up 41.3% of total revenues. For its latest quarter, drilling services accounted for 60% of revenues and rental tools accounted for 40% of revenues.

On the company’s last earnings call, Parker Drilling’s management gave some details about what they anticipate for the rest of 2018 and into 2019. Some specifics include:

Gary Rich, President and CEO of Parker Drilling commented on the current state of the oil and gas industry. “Given the air of uncertainty that still characterizes this market, we continue to approach our spending and investments with a high degree of prudence.”  Even as oil and gas prices have increased this year (see the graph below for YTD changes in WTI pricing), there has still been a degree of volatility, forcing oil and gas E&P companies to carefully weigh their capital spending. 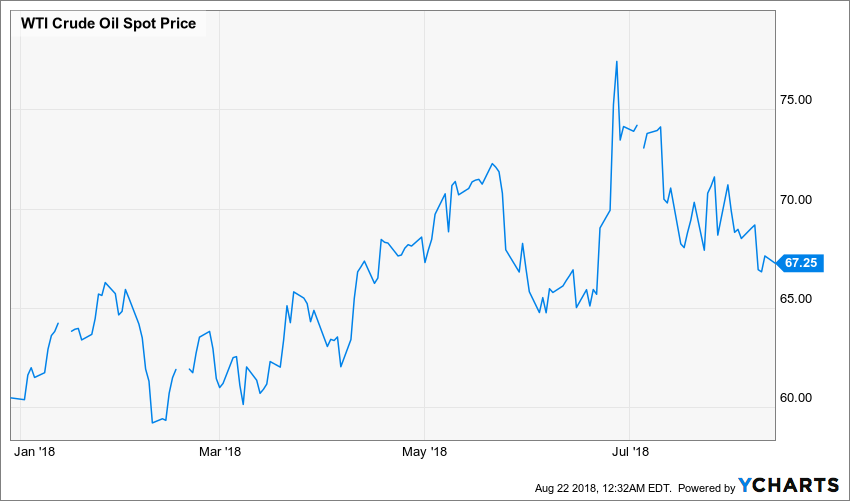 Certainly, these numbers will be affected by things like the escalating trade war between the U.S. and China as well as the impending sanctions the U.S. is ready to enforce on the nation of Iran.

Interest coverage is of paramount importance for bondholders as it indicates the company’s ability to service its existing debt. For its latest reported quarter, Parker Drilling reported operating income (minus non-cash depreciation) of $27.0 million and interest expense of $11.2 million, for an interest coverage ratio of 2.4x.  The company also maintains a healthy liquidity level. As of June 30, 2018, Parker Drilling had total liquidity of $167 million, made up of $114.5 million in cash and $52.5 million available under its revolving credit facility.

The risk for bondholders is whether Parker Drilling can continue to grow revenues and cash flow in time to meet its debt maturities coming up in 2020. The company has $305 million in total of notes and ABL maturing in 2020. Company management indicated in its latest earnings call that they are “carefully evaluating options to enhance our capital structure in light of upcoming debt maturities”. While the exact nature of this evaluation is still unknown, the company will likely look for ways to pay off or roll over its debt.

Parker Drilling’s revenues are directly affected by the price of oil.  Since oil hit its recent low in early 2016, it has continued to seesaw, but WTI prices have seen a run-up in the past four to six weeks. As of the writing of this article, oil has hit new highs not seen since late 2014. The outlook for prices looks favorable. However, if oil prices were to experience another significant and prolonged decrease, it could affect Parker Drilling’s revenues and profitability.

Parker Drilling derives a substantial percentage of its revenues from a few key customers. The loss of one of these significant customers would have an adverse effect on the company’s revenues and profits. In 2017, Parker Drilling’s largest customer, ENL, accounted for roughly 32.3% of total revenues, while BP, the company’s second largest customer, accounted for approximately 9.7% of total revenues. 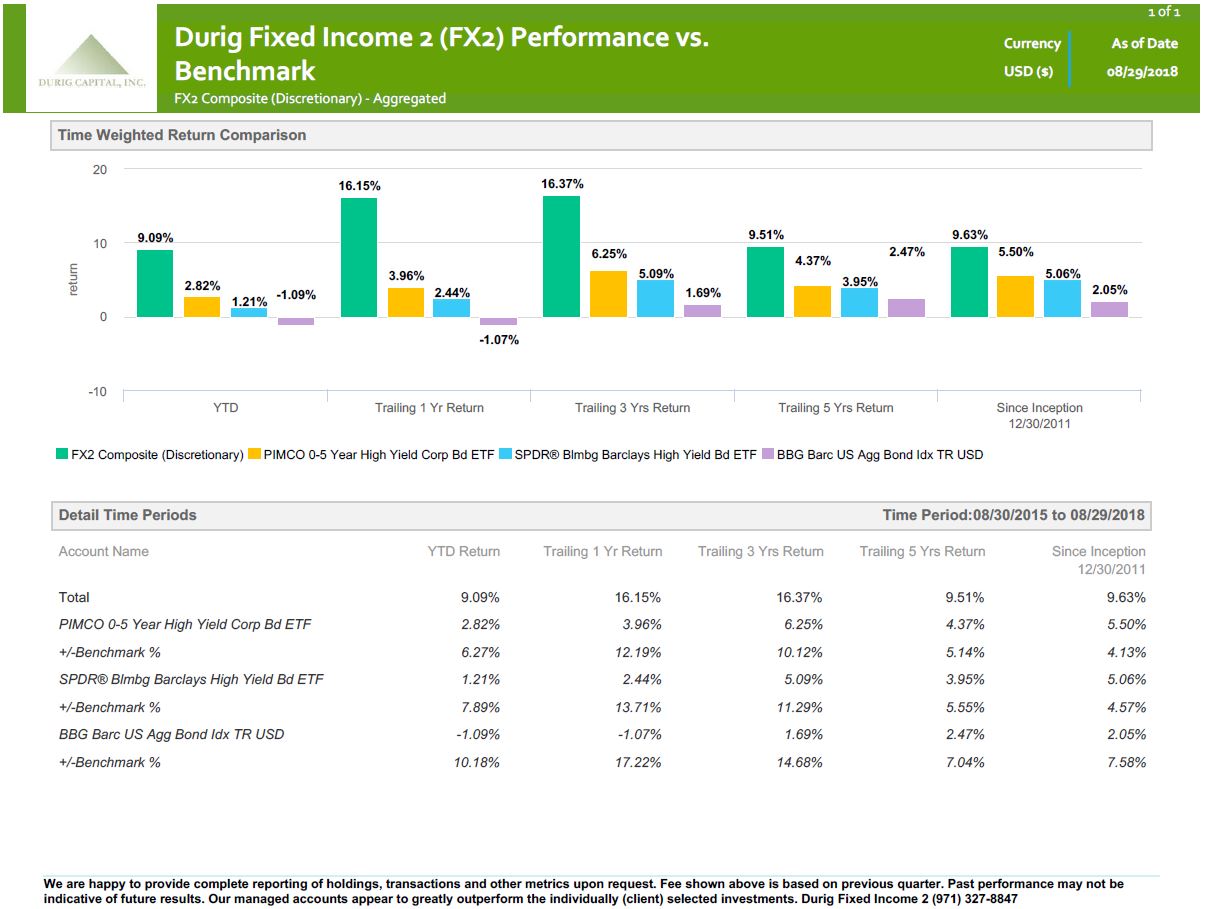 As the price of oil has increased over the course of this year, Parker Drilling has also increased its revenues. Its latest quarterly revenue results logged consecutive quarter increases as well as year-over-year increases. Increasing oil prices are indirectly responsible, as oil producers ramp up their exploration and production efforts to chase increasing commodity prices. The company is beefing up investment in its rental tools segment, which has good margins and a relatively quick payback on investment. With oil prices seemingly stable at this point, the company could begin to see additional increases in not only its rental tools segment, but also its drilling service segment. Durig Capital already has the 2020 Parker Drilling bonds in its  FX2 managed income portfolio. The company’s strong Q2, as well as this bond’s excellent yield-to-maturity of over 13.25%, makes PKD’s 2020 bonds an ideal addition to Durig’s FX2 Portfolio, the most recent performance of which is shown above.