(all price quotes are in Canadian Dollars, CAD)

This week, Durig Capital looks at a company that focuses on children’s content and brands. DHX Media (TSX: DHX; NASDAQ: DHXM) is the company behind such well-known names as Peanuts, Teletubbies, Inspector Gadget and the Degrassi franchise. With children spending more time viewing content not only through traditional television and cable, but also on various devices with online streaming capabilities, DHX is looking to optimize its proprietary children’s content through various channels. Having acquired the rights to the Peanuts brand a few years ago, the company is now starting to realize revenues from this iconic brand through licensing agreements with retailers like Lands’ End, Baskin Robbins, Tupperware, Levi’s and Macy’s just to name a few. The company’s most recent quarterly results show growth not only in its Peanuts brand, but most notably in its WildBrain subsidiary.

DHX Media is avidly pursuing content delivery via both subscription-based services, with a recent deal with Comcast, as well as ad-supported video-on-demand, like WildBrain. With additional revenue opportunities from producing its own content, as well as licensing existing content to third parties, DHX has various ways to monetize its massive library of ready to deliver content. The company’s 2024 bonds, which carry a convertibility feature, are currently trading at a discount, giving them a most impressive yield to maturity of about 12.75%, and make an excellent addition to Durig Capital’s Fixed Income 2 (FX2) High Yield Managed Income Portfolio. 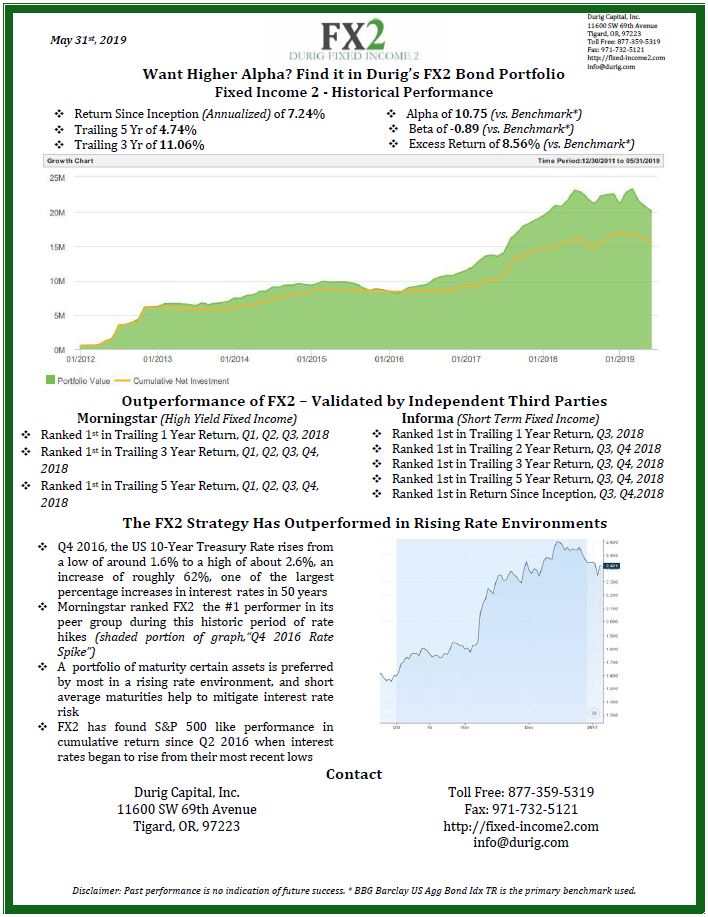 DHX Media has been building momentum in its quarterly cash flow this fiscal year. For its most recent quarterly results (three months ending March 31, 2019), the company continued to build on the improvements in cash flow seen in the first two quarters of FY 2019. 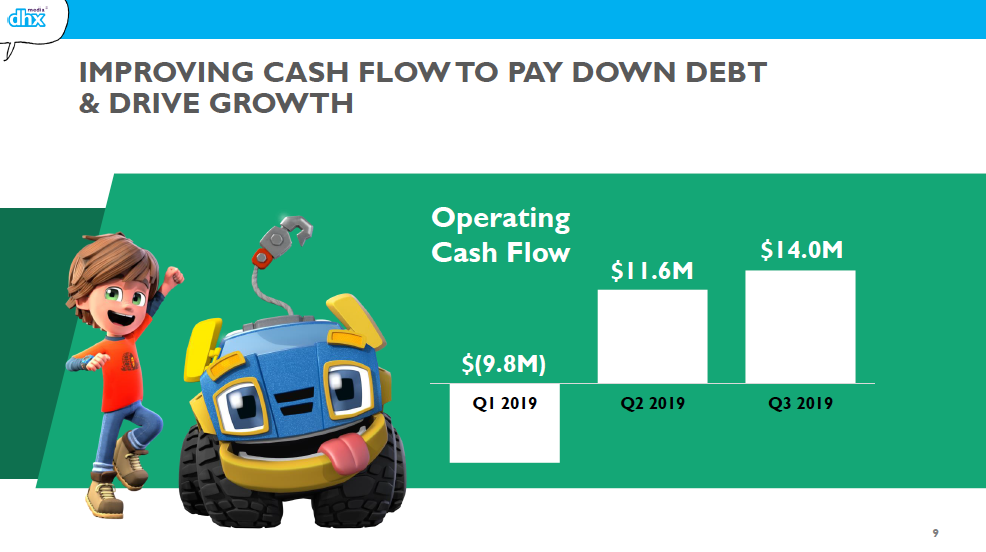 The company also recorded additional solid results for the quarter including:

Perhaps one of DHX Media’s smartest acquisitions to date was its June 2017 acquisition of the entertainment division of Iconix Brand Group, Inc., which included both an 80% controlling interest in Peanuts and a 100% interest in Strawberry Shortcake. Today, Peanuts, created by Charles M. Schulz, is the world’s sixth largest character brand by retail sales. In Q3, the Peanuts brand contributed to the signing of 85 new deals for DHX Media as well as 70 renewals with companies like Lands End, Baskin Robbins, and Tupperware. In addition, Levi’s is currently launching its second collaboration with Peanuts with an expanded line of products that will be available around the globe.

DHX Media Ltd. (TSX: DHX; NASDAQ: DHXM) is a global children’s content and brands company, recognized for such high-profile properties as Peanuts, Teletubbies, Strawberry Shortcake, Caillou, Inspector Gadget, and the acclaimed Degrassi franchise. One of the world’s foremost producers of children’s shows, DHX Media owns the world’s largest independent library of children’s content, at 13,000 half-hours. It licenses its content to broadcasters and streaming services worldwide and generates royalties through its global consumer products program. Through its subsidiary, WildBrain, DHX Media operates one of the largest networks of children’s channels on YouTube. Headquartered in Canada, DHX Media has offices worldwide.

DHX Media’s 2024 bonds are convertible, meaning that these bonds can be converted to DHX Media common stock at a conversion price of $8 per share. DHX can redeem the notes anytime after September 30, 2020 if the stock’s current market price is 135% of the conversion price. This would mean the share price would need to be $10.80 / share. Also important for bondholders to know, the company has the right to repay the principal of these notes by issuing common stock using a share price that is 95% of the stock’s current price on the redemption date. Over the past year, DHX Media stock has ranged from a low of $1.09 to a high of $3.69.

WildBrain, a wholly owned subsidiary of DHX Media, operates one of the largest networks of children’s channels on YouTube. Growth for this ad-supported video-on-demand (AVOD) service is one of the DHX Media’s top priorities, and WildBrain has been performing well. The core asset of WildBrain is its large and growing audience. In Q3, views on WildBrain increased by 15% to more than 8.7 billion and watch times grew by 9%. One in three kids worldwide with access to YouTube watch videos on WildBrain each quarter. The following graphic shows WildBrain’s growth over the past few years. 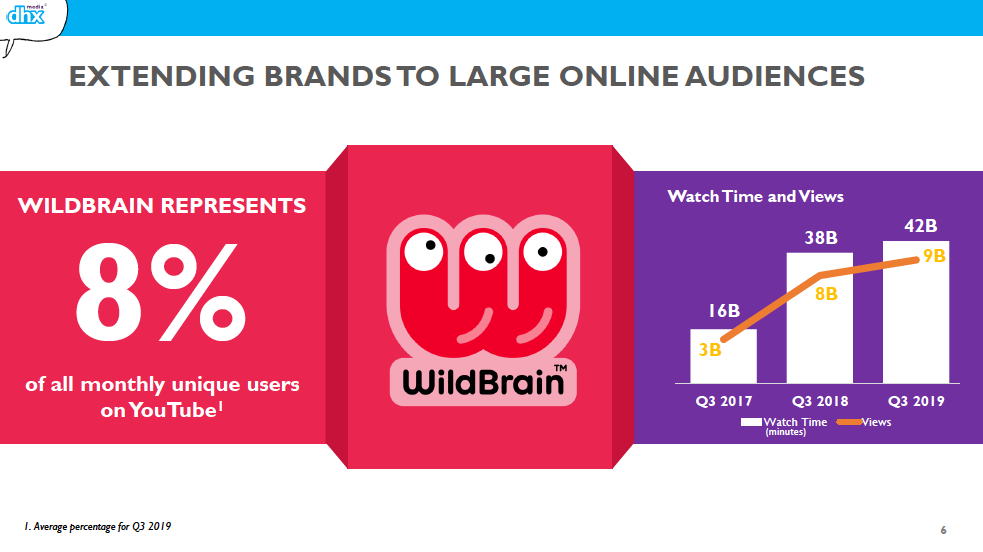 DHX Media has locked down additional engagements that should give additional visibility to its brands as well as increase revenues. First, the company announced a deal with Apple in late 2018 to produce Peanuts content for Apple’s upcoming streaming service. DHX will develop and produce original series, specials and shorts that feature the Peanuts group of characters created by Charles M. Schulz. Apple’s streaming service should launch in the second half of 2019.

In addition to the deal with Apple, DHX recently announced that it had closed a deal with Comcast to debut a brand new children’s subscription based video-on-demand service called Kids Room. The service will launch in the summer of 2019 and will be an ad-free service with kid-friendly programs sourced from DHX Media’s library of content. The service will be available on Comcast’s Xfinity X1 as well as Xfinity Flex. Customers can add Kids Room to their service for $4.99 per month.

Interest coverage is an indication to bondholders of an issuer’s ability to service its existing level of debt. DHX Media’s most recent quarterly results indicate operating income of $25.3 million (loss before taxes of -$19.1 million, adding back $10.2 million in interest expense and $34.2 million non-cash impairment charge), with interest expense of $10.2 million. This calculates to an interest coverage of 2.5x. In terms of liquidity, DHX had cash on hand as of March 31, 2019 of $42.4 million.

Ouch! There was a server error.
Retry »

The risk for bondholders is whether DHX Media can continue to build on the momentum it has produced over the last few quarters. The company’s most recent numbers have not been their best performance as many of their financial metrics did not register increases over last year. Changes in the YouTube platform along with issues related to the YouTube Kids app has provided some challenges in viewing content for customers, but DHX Media’s CEO Michael Donovan emphatically believes that “AVOD is the future of television” and that DHX Media is “the number one leader in the family and children’s space by several miles and accelerating.” With kids viewing hours increasing he may be on to something. At any rate, the outstanding yield-to-maturity of over 12.5% on these convertible 2024 bonds does appear to outweigh the risks identified. 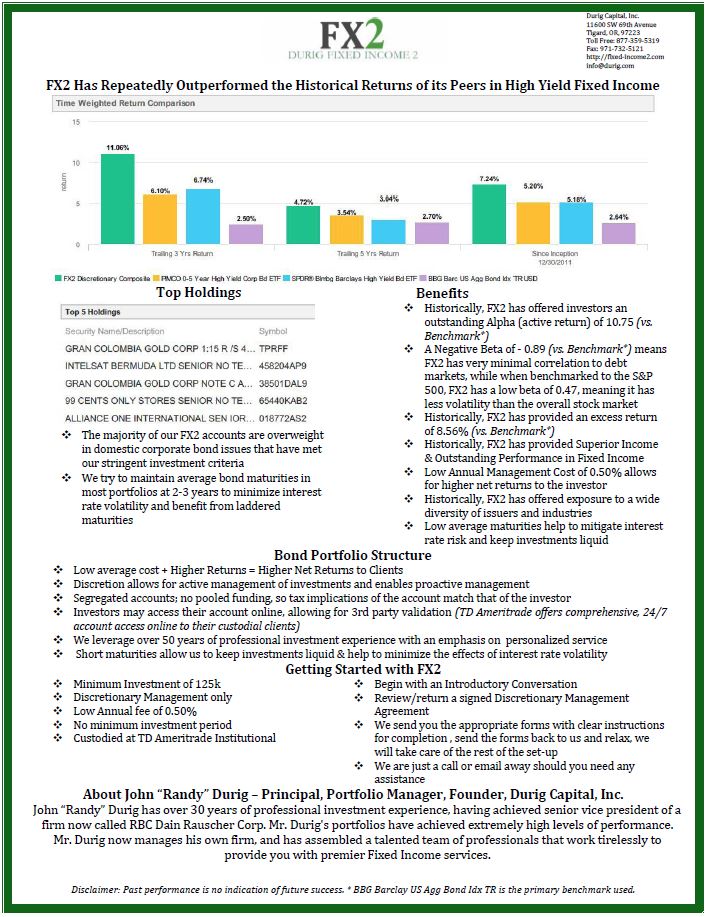 DHX Media owns the rights to some of children’s most beloved characters; Snoopy, Charlie Brown, Teletubbies, Caillou, Super Mario and Inspector Gadget. The company is a leader in its ownership, production and distribution of children’s content in both more traditional TV markets and certainly in the streaming space (YouTube). The company’s 2024 convertible bonds are currently trading at a significant discount, giving them an outstanding yield to maturity of about 12.75%, making these competitive yielding notes make an ideal addition to Durig Capital’s Fixed Income 2 (FX2) High Yield Managed Income Portfolio, shown above.

Durig's FX2 Is A High Yielding, Short Term, Low-Cost, Managed Income Portfolio, designed for performance. The FX2 Portfolio specializes in converting raw wealth into much higher levels of income, and in turn, increased quality of life for clients. Durig’s FX2 Portfolio has, over time been known to have historic periods of significant outperformance. As a fiduciary first and foremost, we provide our Advisory clients with a personalized fiduciary service at a very low-cost. Ask about our many services today!
http://fixed-income2.com/