This week, Durig Capital looks to the healthcare sector where a specialty pharmaceutical company has posted solid back-to-back quarters resulting in increased guidance for 2018. As a result of Mallinckrodt Pharmaceuticals’ performance in both Q1 and Q2, company management has raised 2018 guidance citing solid performance across its product lines. Some of the highlights from Mallinckrodt’s Q2 numbers include:

Demand for healthcare in this country continues to increase. And as the population ages, more treatments will be needed for various diseases and ailments. Mallinckrodt has done a masterful job in its growth through acquisition, acquiring companies with tested and market ready products. Its 2023 bonds are currently selling at a discount, giving them a yield to maturity of over 8%. With two solid quarters behind them and the prediction for increased sales in 2018, these 2023 bonds make an ideal addition to Durig Capital’s Fixed Income 2 (FX2) Managed Income Portfolio, the most recent performance of which is shown below. 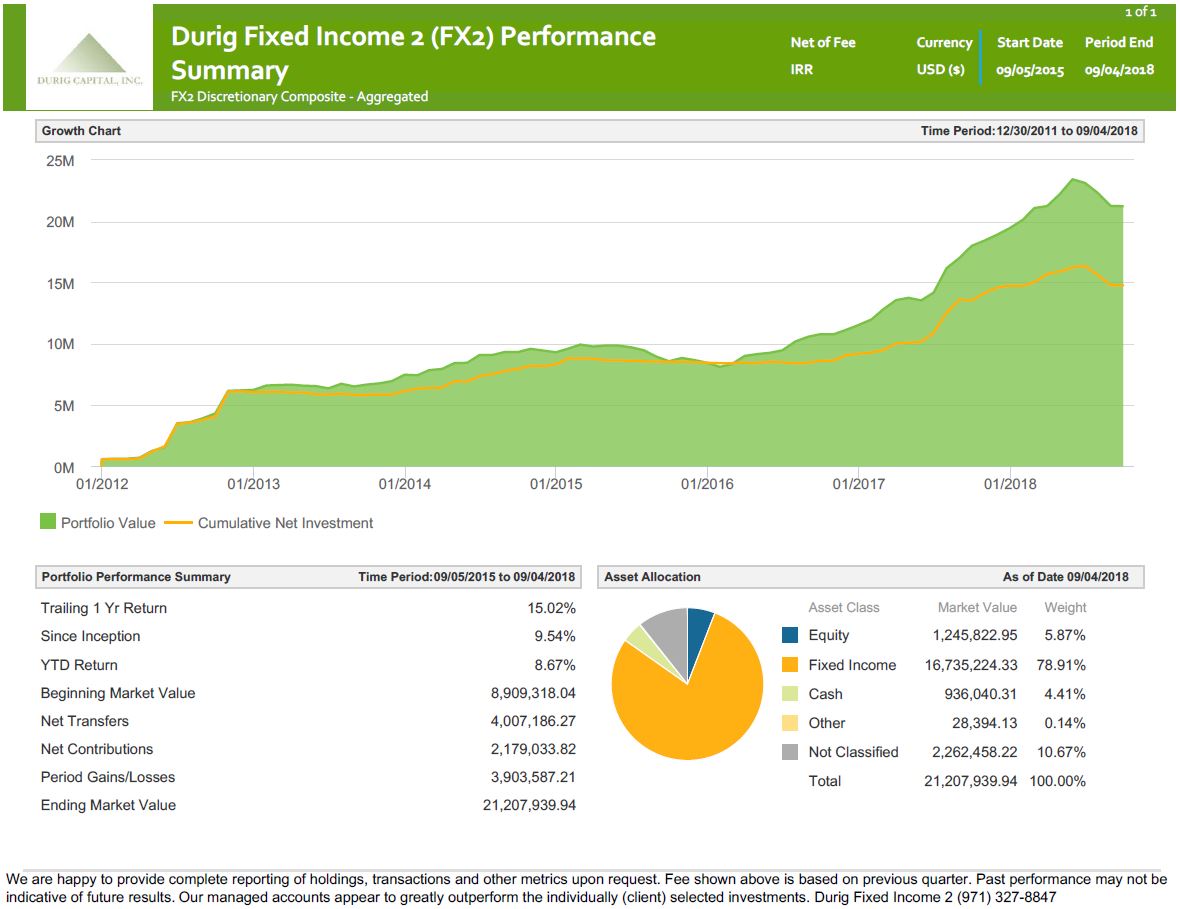 Mallinckrodt recently reported its results for the three months ending June 29, 2018. The company logged some impressive metrics, including sales increases, and expense and debt reductions.

In light of the company’s strong first and second quarter performance, Mallinckrodt has increased its guidance for 2018.  It guidance for total net sales was originally set to increase between 3% and 6%. That metric has now been updated to reflect an increase between 4% and 7%. In addition, the company raised its expectation for adjusted diluted EPS (earnings per share) from between $6.00 and $6.50 to $6.50 and $6.90.

The Mallinckrodt Pharmaceuticals of today originated as a spinoff from then medical device and supply company Covidien. In 2013, Covidien spun off its pharmaceutical business, which today is Mallinckrodt Pharmaceuticals. The company has grown since then, primarily through acquisition of smaller pharmaceutical companies. Today, Mallinckrodt is a global business that develops, manufactures, markets and distributes specialty pharmaceutical products and therapies. Areas of focus include autoimmune and rare diseases in specialty areas like neurology, rheumatology, nephrology, pulmonology and ophthalmology; immunotherapy and neonatal respiratory critical care therapies; analgesics and gastrointestinal products. For its fiscal year 2017, the company registered net sales of $3.2 billion.

Not only did Mallinckrodt deliver on its overall numbers in Q2, the company also had healthy year-over-year increases in some of its specialty drugs.  The largest increases came from the brands OFIRMEV and Therakos. The company’s OFIRMEV injection (pain relief) registered a 13.1% increase in net sales ($85.6 million compared to $75.7 million), and Therakos’ (immunology) net sales were $56.8 million compared with $51.2 million, an increase of 10.9%.

Notably, one of the company’s most prominent specialty drugs, H.P. Acthar Gel, did show a decrease in Q2 net sales. However, Mallinckrodt has stated that it expects its Acthar Gel to earn more than $1.0 billion in revenues in fiscal year 2018. This drug is already approved to treat 19 different indications, and the company is in clinical trials to have the drug approved to treat additional indications.

Growth through Acquisition and Research

In addition to growth through acquisition, Mallinckrodt also has some promising opportunities in its research pipeline. Included in this pipeline is StrataGraft, a regenerative skin therapy for treating patients with deep partial burns, and a muscular dystrophy drug that is set to advance to Phase II trials.

Interest coverage is of paramount importance to bondholders as it indicates the company’s ability to service its existing debt. For the six months ending June 29, 2018, Mallinckrodt had operating income (without the effect of non-cash depreciation expense) of $407 million and interest expense of $186.5 million for an interest coverage ratio of 2.2x.

In terms of liquidity, the company closed Q2 with a cash balance of $235.7 million. After the close of the quarter, Mallinckrodt paid an additional $75 million on its revolving credit facility, bringing the company’s current cash balance to approximately $200 million.

The risk for bondholders is whether Mallinckrodt can continue to improve its balance sheet via debt reduction while at the same time, increase sales of its existing line of pharmaceuticals. The company has reduced debt this year by over $500 million and Q2 numbers show healthy increases in several of its specialty pharmaceuticals. Also, the company has several promising new treatments in its pipeline that are in various stages of clinical trials and should provide additional sources of revenue in the coming years. In light of these developments, the over 8% yield to maturity on the company’s 2023 bonds does appear to outweigh the risks identified. 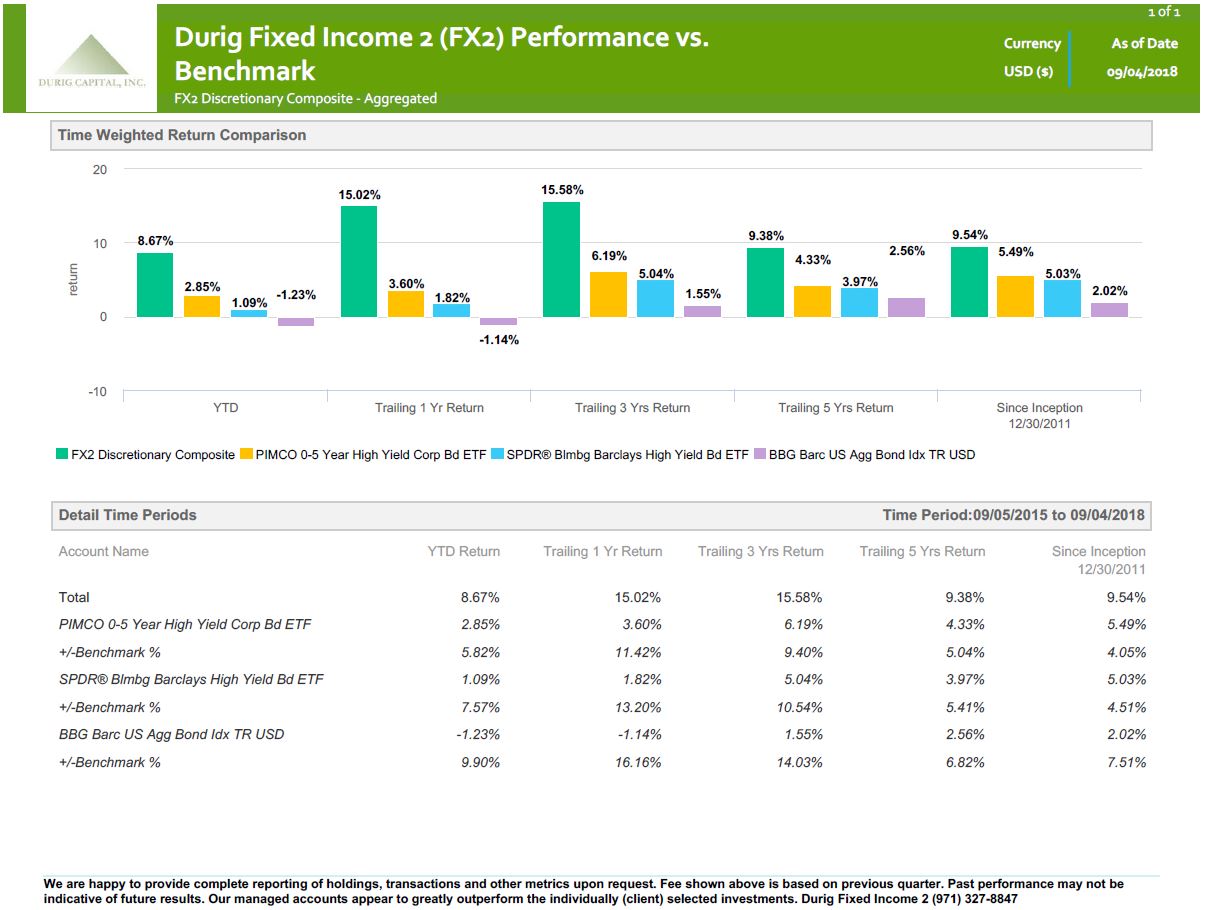 Mallinckrodt has grown steadily since its spinoff from Covidien in 2013. While most of that growth has come from acquisition, the company now has several products in process that should provide additional sources of revenues in the coming years. Also, investing in the healthcare sector provides diversification into a growing industry in this country whose demand is increasing as a large portion of the population ages. Mallinckrodt has had two successful quarters – enough to increase 2018 guidance. With company management confident in a successful 2018, Mallinckrodt’s 2023 bonds make an ideal addition to Durig Capital’s FX2 Managed Income Portfolio, the most recent performance of which is shown above.