This Article originally appeared on the working the doors website and took a closer look at these remarkable devices, answering key questions while discussing the uses, limitations and benefits of radio earpieces.

A vast number of industries require the use of radio earpieces.

If you work in security, door supervision, the secret service, catering, event management/hosting, manufacturing, factory work, construction, broadcasting, the prison service, police or other emergency services, the chances are you’ve used a radio earpiece at some point.

Radio earpieces allow colleagues to communicate over long distances. A crowded dining hall, for example, might prove a difficult place from which to co-ordinate staff. If said staff are using earpieces, however, talking to them becomes as simple as pushing a button and letting them know what’s up.

Radio earpieces are efficient, effective and mostly hands free. That’s why they’re so commonly used across such a wide spectrum of fields.

2.   What are Radio Earpieces Used For?

The main function of a radio earpiece is the facilitation of reliable communication between colleagues over a distance.

Many earpieces are also very discreet, as well as totally private. They are far less noticeable than a mobile phone or two-way radio.

Radio earpieces also allow for hands free communication, which is very useful in situations where both hands are needed (such as security or policing).

Earpieces can also act as a deterrent. A security guard equipped with an earpiece looks as if they have access to back-up. Earpieces can subtly increase security and deter crime, simply by being worn by the right people in the right place at the right time.

As an added bonus, radio earpieces provide a type of passive noise cancellation, which blocks out some of the noise from large crowds, concerts or etc, but not so much that the user can’t hear what’s going on around them.

3.   What are the Benefits of Radio Earpieces?

There are many benefits associated with using radio earpieces.

Radio earpieces provide fast, efficient communication over long distances. They also offer a degree of noise cancellation. This allows for clearly audible conversations between colleagues across even the loudest environments (without blocking out ambient sound).

If you need to conduct private conversations (i.e. those that are inaudible to anybody around the receiver), a radio earpiece setup can be an excellent choice, as they offer total discretion (from a distance, a covert radio earpiece is all-but invisible).

As described elsewhere, earpieces are also good at deterring criminals.

Earpieces allow the user to keep both hands free while talking or performing a specific function (e.g. security).

On top of all that, earpieces are very easy to operate, as well as easy to maintain and clean.

4.   What are the Limitations of Radio Earpieces?

We wouldn’t be doing our job if we didn’t touch on some of the limitations of radio earpieces, not least because any manufacturers reading this may spot the opportunity to improve their products. Even if that doesn’t end up being the case, honesty is always important, isn’t it?

The truth is that not all radio earpieces are comfortable to wear. The ones that are comfortable can also end up becoming uncomfortable if worn for extended periods. The sad fact is that there isn’t much anybody can do about that, either.

Also, there is no industry standard for connectors, which causes problems from time to time. If the connector doesn’t fit your walkie-talkie or two-way radio, there really isn’t going to be any way to make it fit.

Major brands (such as Motorola, Hytera, Icom or Kenwood, among others) have a brand-specific connector configuration, but some companies utilize different connectors for different products, even when they are otherwise similar (a Hytera two-pin connector, for example, will not connect to a Motorola two-pin). This can get quite confusing and more than a little bit irritating.

Radio earpieces also need to be cleaned regularly. This is a relatively easy process, however.

5.   What Equipment is Compatible with Radio Earpieces?

Radio earpieces are mainly used with two-way radios and walkie-talkies, but they are also compatible with presenter receive monitors (though they can only receive messages) and mobile phones.

6.   What Should I Consider Before Buying an Earpiece?

As mentioned above, connectivity is an important issue. When buying an earpiece, you must be sure that you can connect it to your intended device.

Other concerns include making sure that the wire for both the earpiece and the microphone is long enough for your purposes. It is important that the user is able to move freely while using the earpiece, and won’t be restricted in any way.

Sound quality is also an important issue. Good sound quality is vital, but it doesn’t need to be great. You just need to be able to hear and follow a conversation. You won’t need studio quality sound, for example – you’re doing a job, not making an album!

Also, ask yourself what you’re going to be using the earpiece for. Do you want a covert or overt earpiece? You’ll want to choose a design based on what job you’ll be doing with the earpiece (more on this later).

Consider if you’ll need features like Kevlar lining or hard cabling. These are very useful if the earpiece is likely to be grabbed or pulled. Basic earpieces are actually quite delicate and do not often survive scuffles.

Security staff, for example, will be better off using the reinforced kind.

It represents ‘false economy’ to save money upfront by buying the cheaper versions, only to spend more over the long term by constantly replacing them when they break.

The ‘Push To Talk’ (PTT – sometimes known as ‘Press To Transmit’) is a method of having conversations on half-duplex communication lines. Using it couldn’t be simpler.

The operator pushes the button on the hand-held microphone, walkie-talkie, two-way radio or earpiece itself. The transceiver, in response, switches from ‘receive’ mode to ‘transmit’ mode. The operator then talks, so you push…to talk. See?

8.   How do Acoustic Tube Earpieces Work?

Acoustic tubes are a deceptively clever idea. The radio receives a signal, which it relays via the transducer (a small speaker).

The speaker vibrates the air inside the acoustic tube and those vibrations travel up the tube, reaching the ear.

Because the tube is snugly sealed into the ear, the sound comes through as clearly as it would if the user were wearing headphones.

9.   What Different Styles of Earpiece are There?

Radio earpieces come in a wide variety of styles, shapes and sizes. Each has their own unique benefits and drawbacks, as well as tasks for which they are well and poorly suited.

In this section, we’ll take a look at some of these different models, as well as where they might best be used.

Gel earmoulds – These are usually used with acoustic tube earpieces. The open ear mould is a neat alternative to the mushroom-shaped earbud. Gel earmoulds fit snugly into the ear canal and are generally quite comfortable to wear. They remove some ambient noise, but not so much that the user can’t tell what’s going on around them.

1-wire kits – These complete kits feature a radio, a chest-attached PTT mic and an earpiece, all connected by the same wire.

2-wire kits – Similar to the 1-wire kits, these also feature a radio, PTT mic and earpiece, except that the PTT mic is attached to the sleeve as opposed to the chest. As the name suggests, two wires are used to achieve this setup.

3-wire kits – In this setup, three wires run out from the radio. One ends with the PTT mic, which is attached to the sleeve, one connects directly to the earpiece and one attaches to a concealed microphone which can be hidden beneath a shirt or coat. 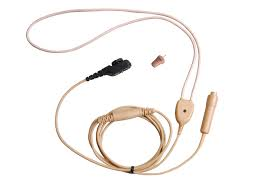 Wireless kits – Wireless kits use an in-ear grommet which is connected to either a neck loop receiver or a receive pack behind the collar. The grommet and the receiver connect wirelessly via a low level radio frequency. A two or three-wire kit is then used to complete the setup. 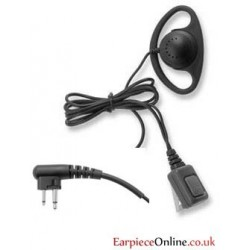 D-ring style – This is an earpiece that forms a distinctive ‘D’ shape that fits around the outer ear. These are readily available as well as easily affordable. They can also be cleaned easily and used by multiple people working different shifts. On the negative side, they can become uncomfortable over long periods and can only be used as part of a 1-wire setup.

G-shaped style – Supposedly, G-shaped earpieces (which form a ‘G’ shape as opposed to the ‘D-ring’ design) are a lot more comfortable than many other models. In any instance, they are certainly more flexible. G-shaped earpieces use sock foam to improve sound quality as well as comfort. Again, these can only be used as part of a 1-wire setup.

Acoustic tube – As described above, the acoustic tube makes for a high quality covert experience. These earpieces must be cleaned regularly, however, as dirt and earwax can build up and negatively affect performance.

Earbuds – Earbuds are great for blending in, as they can make a security guard or undercover police officer simply appear to be listening to music or talking on the phone like many other members of the general public. If the PTT mic is showing, however, this can expose the person who is trying to be inconspicuous. Otherwise, this type of earpiece can be comfortable and user friendly, as most other earpieces of this type are.

Radio headsets – These headsets, which go over the head and sit against each ear, are excellent for reducing noise in very loud environments, such as construction sites. They are great for two-way communication and comfortable to wear as they aren’t invasive and are very adjustable. They aren’t particularly well suited for security work, however.

Remote speaker mic – Remote speaker mics work very well, but they are not very covert. Passers by can easily overhear all communications. These mics are suitable for all weather conditions, however.

Bone conduction – Bone conduction headphones, also known as ‘bone-phones’, work by vibrating the skull. This bypasses the eardrum entirely, with the vibrations being interpreted directly by the cochlea. The technology has been used by audiologists since the 1970’s, but is relatively new to the consumer market. There’s no need to talk into a mic if you’re using bone-phones, simply push the PTT button and start talking. These headphones are good for loud environments.

Throat mic – A throat microphone, also called a laryngophone, works by absorbing vibrations directly from the wearer’s throat by way of small sensors attached to the wearer’s neck. These sensors can pick up vibrations in even the loudest environments. They can even pick up faint whispers, which makes them perfect for jobs that require quiet communication and/or a high level of discretion. They also work well in instances where the user is required to wear a helmet.

That’s really up to you. OK, reading that back, it seems like a bit of a cop out. The best advice we can offer would be to go back through this article and assess which of the activities mentioned in it match up to the requirements of the job you have in mind.

Earpieces aren’t useful in every occupation, nor do they help in every situation. However, if you are in a situation where clear, reliable and private communication needs to be conveyed, over long distances and in real time, then you just might find that a radio earpiece can be the answer to your problems.

Working the Doors has always been recognised as the main UK ‘Door Supervision Organisation’ outside of the SIA and so has close links with Door Supervisors and Security Contractors/Companies.
http://www.workingthedoors.co.uk