This week, Durig Capital takes a look at an industrial designer, manufacturer and marketer of aftermarket parts for light vehicles, commercial trucks and other industrial uses.  Tenneco (NYSE:TEN) is on track and getting ready to create two market leading companies after its landmark acquisition of Federal-Mogul late last year. Its second quarter results tell the story of a company working diligently to grow its business, even among some industry slowdowns (see above).

Tenneco’s 2024 bonds have a yield-to-maturity of just about 7.85%. This is a fantastic yield, especially when investors can’t even get 2% from the current 30-year U.S. Treasury bond. In light of this and the company’s solid Q2 performance, these bonds are ideal for additional weighting in Durig Capital’s Fixed Income 2 (FX2) High Yield Managed Income Portfolio, the aggregated performance of which is shown below.

Tenneco’s recent acquisition of Federal-Mogul in October of last year certainly added revenues. But even without the increase from Federal-Mogul, the company still posted an incremental increase in revenues in the second quarter, despite the fact that global light vehicle industry production decreased by 8%. Here are some of the highlights from the company’s second quarter.

Tenneco’s co-CEO also had good things to say about what the company anticipates for the third quarter:

“In the third quarter, we expect our revenues to outgrow the markets we serve. More importantly, we anticipate higher margins on a year-over-year basis in both divisions supported by operational performance improvements, synergy realization and our continued focus on eliminating waste and cost throughout the business.”

Tenneco is on track to separate into two businesses by mid-2020.  (Driv and the new Tenneco – see below “About”)

Headquartered in Lake Forest, Illinois, Tenneco is one of the world’s leading designers, manufacturers and marketers of Aftermarket, Ride Performance, Clean Air and Powertrain products and technology solutions for diversified markets, including light vehicle, commercial truck, off-highway, industrial and the aftermarket, with 2018 revenues of $11.8 billion and approximately 81,000 employees worldwide.

One Company Transforms into Two Companies

Tenneco acquired Federal-Mogul in October 2018. This acquisition was completed with the intent to create two separate entities, creating two market leading companies. The acquisition of Tenneco and Federal Mogul brought together two companies with complementary products. After the spin-off, planned for completion in mid-2020, the new aftermarket ride performance company (called DriV) will include Federal-Mogul Motorparts and Tenneco Ride Performance products. Meanwhile, the powertrain technology company (called the new Tenneco) will be made up of Tenneco Clean Air and Federal-Mogul Powertrain products. Once the spin-off is completed, the new companies will have the following structure. 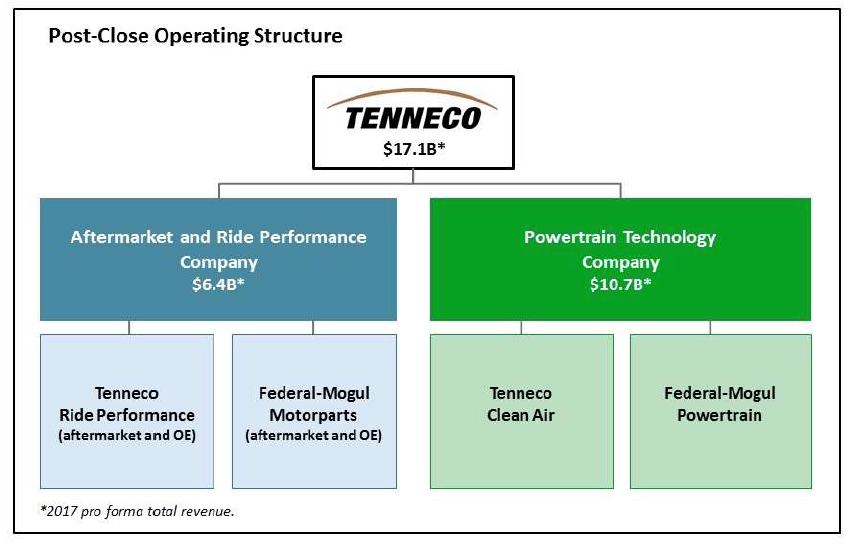 Achieving Synergies Ahead of Schedule

When Tenneco acquired Federal-Mogul late last year, the company estimated that by combining the two companies, they would be able to generate annual run rate earnings synergies of approximately $200 million. The goal to complete these synergies was set for the third quarter of 2020. Due to their diligence and hard work, Tenneco is on track and estimates that these earnings synergies will be accomplished by the end of this year, which is nearly a year ahead of schedule. The following slide from the company’s latest investor presentation shows both the earnings synergies and working capital synergies along with the progress made thus far. 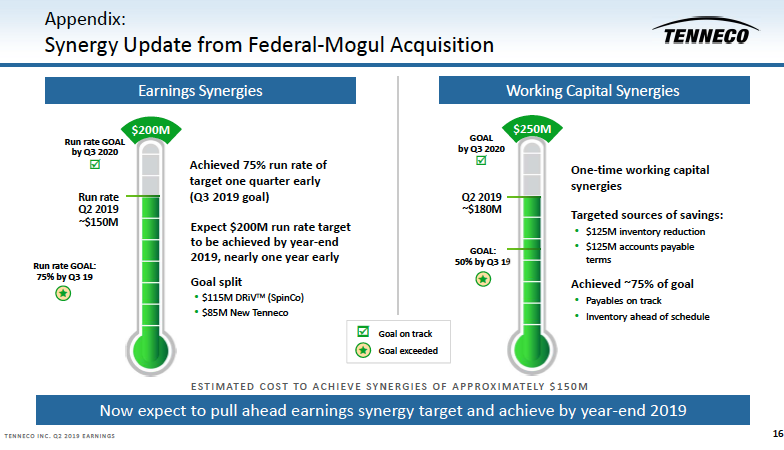 Tenneco’s 2024 bond is currently trading at a notable discount, which translates to a yield-to-maturity of roughly 7.85%. While some might consider this yield on the low side, consider the alternatives. The U.S. 30-year treasury yield has been showing a downward trend most of  this year. A recent check on the latest yields on 30-year treasury bonds reveals a yield of less than 2%. Even if you shorten the time frame of the U.S. Treasury bond to roughly match that of the Tenneco bond at approximately five years, the yield is still only at 1.35% for the five year Treasury bond.

Interest coverage denotes the ability of the bond issuer to cover and service its existing debt load. For its most recent quarter, Tenneco had operating income (without the effects of non-cash depreciation) of $310 million and interest expense of $82 million, for an interest coverage ratio of 3.7x. In terms of liquidity, as of June 30, 2019, Tenneco had cash of $384 million and availability on its revolving credit facility of $1.2 billion.

Sign Up Now to Receive Updates on Tenneco Bonds and Much More!

The risk for bondholders is trying to gauge the success of the new Tenneco and the new DRiV spinoff once it takes place next year. Tenneco has made outstanding progress this year in getting the company ready for the split and it appears those preparations are moving ahead smoothly, even coming in ahead of schedule on some key items such as earnings synergies. Also, the company’s revenue growth significantly outpaced global light vehicle industry production in this latest quarter. Tenneco’s 2024 bonds are currently trading at a discount, with a current yield-to-maturity of about 7.85%. Given the company’s solid performance, especially since the Federal-Mogul acquisition, it does appear this 7.85% yield-to-maturity outweighs the risks identified.

Tenneco’s revenues are significantly tied to the automotive production by its customers. A slowdown in the manufacture of automobiles will certainly affect potential revenues for Tenneco. Some of the potential factors that could affect auto production globally include possible import tariffs in the U.S., stricter guidelines on emissions, slowing economic growth and weaker demand.

Generally, there is reduced risk for investors who invest in Durig Capital’s Fixed Income 2 (FX2) Managed Income Portfolio due to its diversification across many bonds and industries, as compared to the purchase of individual bonds. Also, the FX2 portfolio has historically outperformed when compared to portfolios where investors have chosen bonds individually. Durig Capital currently holds this bond in its FX2 portfolio.

Tenneco is getting ready to become two separate businesses. It has effectively integrated the Federal-Mogul business lines with its own business lines and is ready to create two market leading companies that serve automotive manufacturers and aftermarket retailers. The company’s 2024 bonds currently boast a yield-to-maturity of just about 7.85%, over four times the yield on a similar duration U.S. Treasury. Shrewd investors should recognize the opportunity to provide additional diversification to a shorter duration portfolio, such as Durig Capital’s Fixed Income 2 (FX2) High Yield Managed Income Portfolio, shown above.

Comments for SHOP THE GLOBE