This week, Durig Capital looks to a Canadian issuer, a specialty pharmaceutical company that is successfully treating long-term HIV patients with its unique medicines so that patients have the opportunity to have a better quality of life. Theratechnologies (TSX:TH) has two landmark drugs, Trogarzo™ and EGRIFTA™ specifically developed to help HIV patients. The company has reported its second quarter results (for the three months ending May 31, 2019) and continues to see outstanding growth over its product lines.

(Note: All dollar amounts are USD unless noted)

Theratechnologies has also reported that sales for its Trogarzo™ product in the first five weeks of the third quarter have exceeded sales levels of the first five weeks of the second quarter, fueling optimism of another quarterly increase in revenues. The company’s 2023 convertible bonds are couponed at 5.75% and are trading at a discount, giving them a yield-to-maturity of about 8%. With the pending approval for the company’s entry into European markets and the new treatment profile for its EGRIFTA™ drug coming soon, these bonds look to be an ideal candidate for additional weighting to Durig Capital’s Fixed Income 2 (FX2) High Yield Managed Income Portfolio, the aggregated performance of which is shown below. 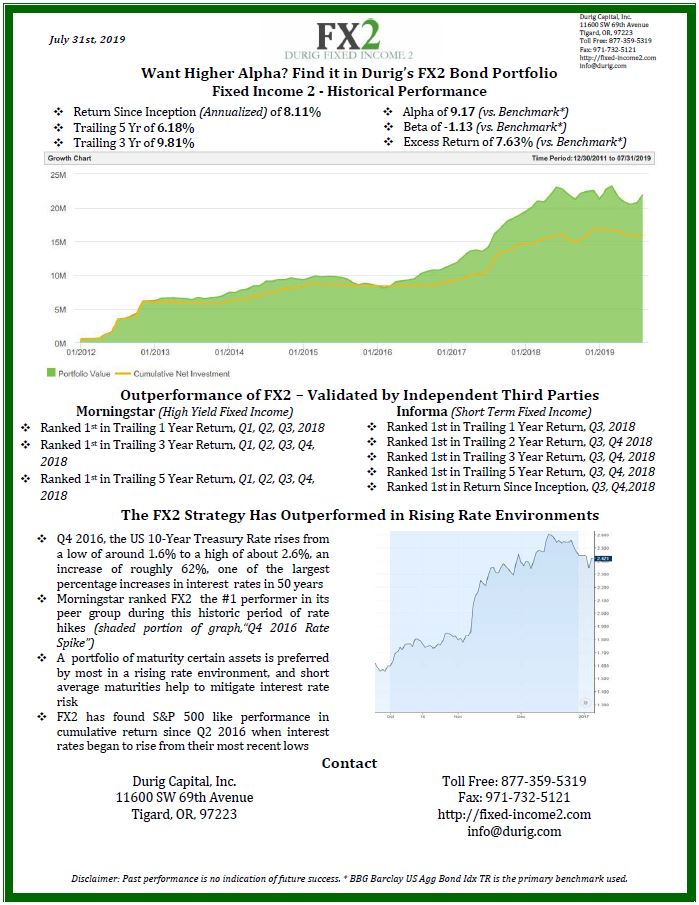 Theratechnologies had a fantastic second quarter. The combination of its flagship products, EGRIFTA™ and Trogarzo™ posted impressive increases in revenues. In addition, the company is on track to introduce Trogarzo™ in Europe, which represents a sizable market for the Canadian pharmaceutical company. Here are highlights from its second quarter results.

Trogarzo™ sales have continued to gain speed in the third quarter. Sales in the first five weeks of the third quarter are over 20% higher than those of the first five weeks of the second quarter. Management believes that peak sales of this drug in the U.S. alone could be at least five times the current sales of its other flagship product, EGRIFTA™. Luc Tanguay, President and CEO of Theratechnologies was pleased with the company’s latest quarter. “The company continues to deliver sustained growth while giving itself the tools and levers to achieve its vision of becoming a significant player in the pharmaceutical industry.”

Theratechnologies (TSX: TH) is a specialty pharmaceutical company addressing unmet medical needs by bringing to market specialized therapies for people with orphan medical conditions, including those living with HIV. The company currently has two products approved for the treatment of conditions associated with patients living with HIV (human immunodeficiency virus); EGRIFTA™, which has been proven to reduce visceral adipose tissue in HIV patients, and Trogarzo™, an injectable biologic, was developed specifically for people living with HIV whose virus is resistant to currently approved antiretrovirals.

Theratechnolgies continues to have exciting opportunities for continued growth for both its EGRIFTA™ and Trogarzo™ products.  For Trogarzo™, the company recently launched a direct to consumer advertising campaign in two key regions in the U.S. with plans for it to be expanded. More exciting is the company’s anticipated entrance into the European market with Trogarzo™. The company is eagerly awaiting a positive recommendation from Europe’s CHMP (the European equivalent of the U.S. Food and Drug Administration) within the next few weeks. The European market for Trogarzo™ is estimated to be about half the size of the U.S. market. 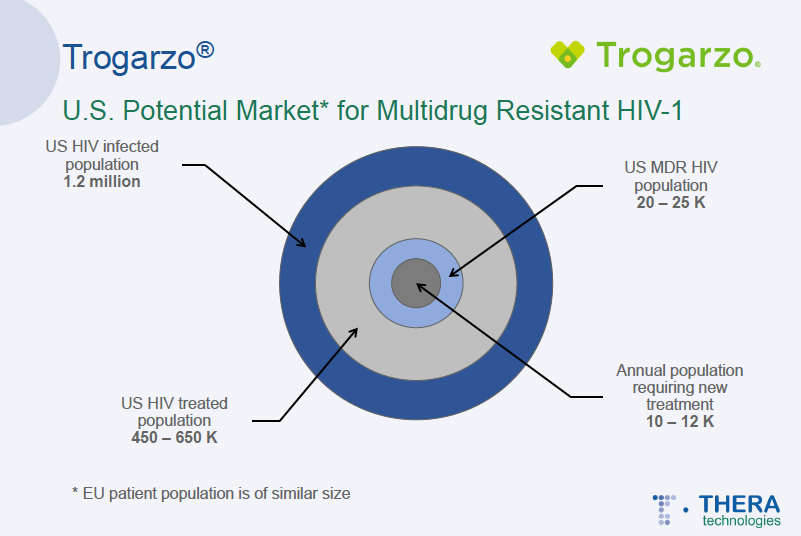 In addition to growth prospects for Trogarzo™, the company has also recently announced that it will pursue the development of a new and patented formulation of EGRIFTA™ for an indication in HIV patients with NASH (non-alcoholic steatohepatitis). This decision comes on the heels of recently concluded research that showed that Tesamorelin (the generic name for EGRIFTA™) reduced liver fat by 37% compared to the placebo. In addition to the encouraging research results, EGRIFTA™ is the only product in late-stage development for the treatment of NASH in HIV patients. Based on preliminary market research, the company estimates that this new treatment could benefit between 100,000 and 300,000 patients in the U.S. only, representing a market potential that could generate approximately 8 times the current levels of EGRIFTA™.

Presently, there is an estimated 1.1 million people in the United States living with HIV. Almost 39,000 people were newly infected in 2016 according to the Centers for Disease Control (CDC). The global population of those infected with HIV totaled 36.9 million at the end of 2017. With the advances in medicine and treatment protocols, an HIV diagnosis is not as serious as it was 30 years ago. But it has translated into HIV patients living longer and developing unforeseen complications from the disease as patients age. The drugs developed by Theratechnologies are designed to address some of these complications.

In its goal to launch its products into Europe, Theratechnologies has had many, likely, one-time expense items figured into its quarterly cash flow. The company registered a loss in operating income for the second quarter of ($2.0) million, but also had non-cash depreciation and amortization expense of $1.9 million. In addition, the company also had an amortization cost of $1.2 million related to an early payoff in 2018 of its royalty obligation to EMD Serono. Taking these factors into account, although it does not appear at first glance that the company is covering its interest expense, it is likely doing so through a combination of cash flow and cash on hand. As of May 31, 2019, the company had cash on hand of $43 million, a more than adequate level of cash to cover the company’s interest expense, which has totaled $2.6 million for the six months ending May 31, 2019.

Sign up to Receive Updates on Theratechnologies bonds, Leading Financial News, Market Research, and much more!

The risk for bondholders is whether Theratechnolgies can continue to grow its sales for both its Trogarzo™ and EGRIFTA™ HIV treatments. The future for both looks promising, with the anticipated approval for European distribution of Trogarzo™, as well as the additional use of EGRIFTA™ in treating HIV patients with non-alcoholic steatohepatitis. In addition, the company is also pursuing its non-HIV pipeline, which focuses on receptor-mediated chemotherapy for cancer patients. In light of these developments, the about 8% yield-to-maturity on Theratechnologies 2023 bonds appears to outweigh the risks identified. 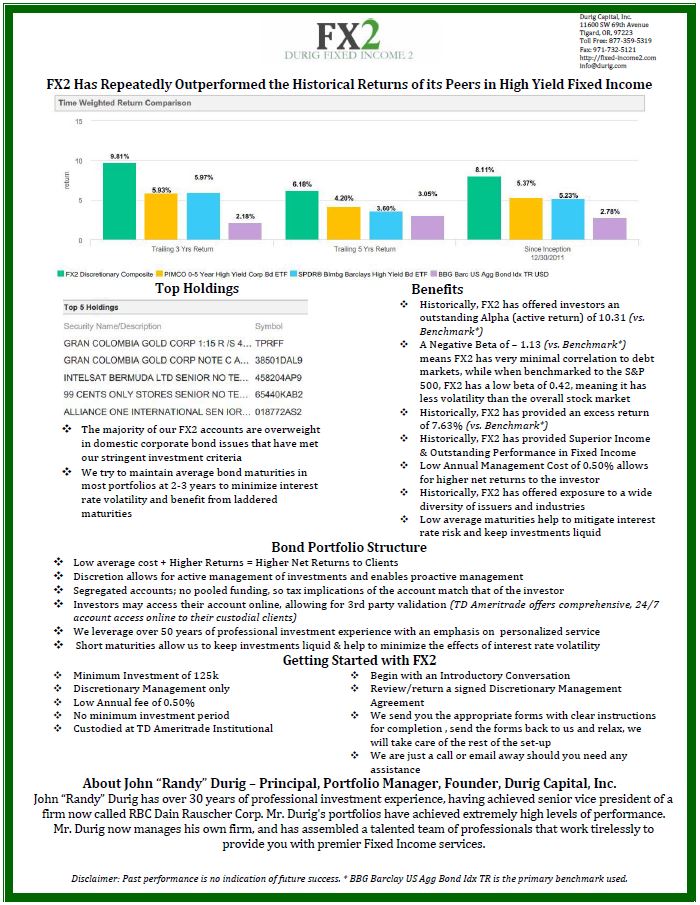 Theratechnologies had an outstanding second quarter, with sales up 62.6% over the same quarter in 2018. It’s Trogarzo™ HIV treatment is on the cusp of being approved for European patients and domestic sales of this drug continue to exceed expectations. The recent research on the company’s EGRIFTA™ formulation to treat HIV patients with non-alcoholic steatohepatitis is also encouraging as the company begins to pursue formal FDA recognition for this new treatment profile. The convertible feature on Theratechnologies 2023 bonds could also provide investors with the possibility for additional return if the stock performs well. With the demand for HIV drugs continuing to grow, these bonds are ideal for additional weighting in Durig Capital’s Fixed Income 2 (FX2) High Yield Managed Income Portfolio, shown above.