The first on our list of most expensive football stadiums in the world located on the southern part of Africa, This stadium is named after the former Secretary General of the South African Communist Party, Moses Mabhida.  It’s a multi-use stadium for several events, like bungee jumping, concerts, cricket, football, golf practice, and rugby union.  Its original capacity of around 54,000 was increased temporarily to 62,700 for the 2010 FIFA World Cup.  Moses Mabhida Stadium has a sports institute and a trans-modal transport station. The stadium officially opened in 2009 as one of the host venues of the 2010 World Cup.

The Santiago Bernabeu is a football stadium located in the Spanish city of Madrid. It has been the home ground of Real Madrid since its inception in 1947. The stadium opened in 1947 and has been renovated four times.

The Santiago Bernabeu is a well-known football ground and one of the most prestigious and iconic stadiums in the world of sport.

In addition, the stadium has witnessed some of the greatest moments in modern football. It played host to four European Cup or UEFA Champions League finals.  Santiago Bernabeu is the first stadium in Europe to host both a UEFA European Championship, a FIFA World Cup final and a Copa Libertadores final. 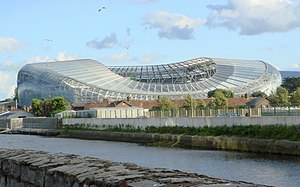 The Aviva Stadium is a sport stadium which opened in 2010. It is built It is built on the site of the former Lansdowne Road stadium. It serves as the home ground of the Irish football team and their National Rugby team as well.  The stadium is Ireland’s first, and only, UEFA Category 4 Stadium.  In 2011, the stadium hosted the Europa League final. In terms of structure, the stadium is a bowl shape with four tiers on three sides of the ground. It has a capacity of approximately 95,000 people.

The Emirates Stadium is the home ground of English Premier League side Arsenal FC.  Also, the stadium is England’s second most expensive stadium behind Wembley. The Emirates has a capacity of 60,000 people, making it the third largest stadium in England. However, the club is yet to taste success on this stadium as they did in Highbury.

The Cape Town Stadium is majorly constructed for the 2010 FIFA World Cup and it opened in 2009. It is the home ground of PSL clubs Ajax Cape Town since 2010 and Cape Town City since 2016.  The stadium serves as the host of the South Africa Sevens rugby tournament since 2015. The capacity of the stadium is 55,000 people due to the reduction from its original size of 64,000. The stadium  connects to  the waterfront through a new road connection, Granger Bay Boulevard

The Estadio Nacional Mane Stadium is the second largest stadium in Brazil and also one of the country’s finest. It is a multipurpose Arena and one of several structures that make up the Poliesportivo Ayrton Senna Complex. The stadium was opened in 1974 and was renovated massively in 2013 for the FIFA World Cup. In 2013, the stadium had undergone some renovations to increase its intake capacity during the 2014 FIFA World Cup. 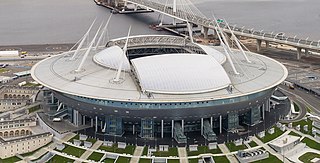 The cost of construction of the stadium is $1.1 billion at current exchange rates. It is, withouta doubt, one of the most expensive stadiums in the world.

The Mercedes-Benz Stadium is the replacement of the old Georgia Dome. It opened in 2017 and serves as the home of MLS side Atlanta United. The stadium is a multi-purpose retractable roof stadium. At 62,350 square feet, the stadium’s video board is the largest in the world. Mercedes-Benz Stadium can occupy a maximum of seventy-three thousand people (73, 000). The stadium is currently under the control of the state of Georgia through the Georgia World Congress Center Authority

The Yankee Stadium is a baseball stadium that serves as the home of MLS side New York City FC. The stadium incorporates replicas of some design elements from the original Yankee Stadium. Like its predecessor, it has hosted numerous events like college football games, two outdoor NHL games, and concerts. The Yankee stadium was opened in 2009 and has a capacity of 54,000 people.

Oludare Enny is a football analyst and the creator of ZenoxSports. He has a bachelor degree in Linguistics and European Languages from the University of Ibadan. He is a writer, content developer and a blogger. Oludare currently manage a football website named www.zenoxsports.com
http://www.zenoxsports.com